Not usually one to link directly to other blogs, but both of these seem on topic for our recent discussions. First, the serious:
Chris Schwarz extracts some further info from el Presidente on the block planes' genesis. Hey, I'd have done that too, if it wasn't for the fact a) I'd ask silly questions, and b) he's too busy trying to guess what my middle initial stands for. No, I don't know why. Must be some sort of unusual executive stress relief - find something else to get stressed about... Don't tell him, but he'll never get it ;-)
On a less serious note, Mitchell has done what many of us may have envisioned - put wheels on the NX60. I can see Lewis Hamilton driving that in next season's F1 championship.... But Mitchell, is that a powered drill press in the background of that perplexed guy's workshop? Tsk. I'm shocked to my core... (Proper job, matey - love it!)
Posted by Alf at 8:08 pm 5 comments:

Dear me; here I am again. The desire to muse seems to have overtaken me, and as that was the point of the blog...
So the dovetail saw and block planes then. It's been most interesting to read the varied reactions to both on the various woodworking fora. The saw I expected to divide opinion; the reaction to the planes was more of a surprise. Quite honestly I'm amazed how many people don't like the looks. I'm also sad to see some folks seems to have forgotten what Lee Valley Veritas is about and seem to think the sizzle may be disguising an absence of steak. Given the improvements implemented, that's a real shame. As they could have legitimately gone with sizzle and the same steak as the regular line, but they didn't, it seems doubly harsh. I've no idea how the designer (for both the planes and the saw) must be feeling; it's something of a roller coaster just for the independent observer.
Anyway, for fun I thought I'd hunt out my own initial reactions to them. First, the initial look at the saw in September 2006, albeit far from its finished form:
"Coo, it's a hard one to get used to the idea of to be honest. It's, well, the familiar made weird I suppose. The handle looks almost verging on normal, 'til you take in the back and then... I can see it makes practical sense like that, in fact it's rather clever, but by gum, it's one that'd take a bit of getting used to.
D'you want me to do Todd Hughes' reaction for you? 'I'm just a slow head but I can't see the sense in buying a saw I wouldn't even bend down to pick up and toss in the trash when there's so many good old saws for sale, cheap. I ain't gonna sorta collect them.' Something like that, anyway..."
And yes, Todd Hughes' reaction was pretty much on those lines. ;-) But as you see, I was a trifle taken aback at first.
Alas, computer foibles mean I lost my reaction to the first sight of the plane, but in July 2007 I got to see a picture of a pre-production model of the NX:
"Ooooooohhhhh indeed.

Just how many frustrated car designers have you got over there? The "V" would be a shoe-in, plus the go-faster stripes down the side. On the other hand there may be some latent desire for a better trainer (sneaker?) 'cos that toe looks almost slipper-like, plus the round heel... Coo, I can't *wait* to read the reactions once it's official.

I shall go forth and dwell upon it for 'some time' - but I think I like it."
And I do. I'm typing this with a group of four adjustable mouth low angle block planes at my elbow - the NX60, DX60, LV and LN - and it results in two things. One; it's really hard to concentrate on typing this when your eye is continuously drawn towards such a line-up of loveliness... Two; we are so very lucky to be woodworking during the production of such a rich vein of hand tool wondrousness. To pick holes in any of them seems to be rather ungracious.
Having said which, I've just realised there's a ding in the finish of the lever cap on my LV regular low angle block. Where's my review of them? Didn't I say keeping them looking nice would be an issue with that finish...? ;-)
Edited to Add: Rob Lee has shared some of the early concepts for the plane and thinking behind the design and so forth here on WoodNet. I only saw the first concept image, as far I can recall. And yes, I did indeed drop the ball on the longer toe issue. Hey, you can have a review in five days - or you can wait thirty days for a good review ;-)
Posted by Alf at 5:43 pm 9 comments: 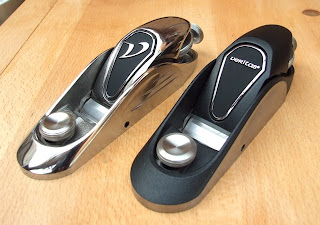 Email ThisBlogThis!Share to TwitterShare to FacebookShare to Pinterest
Labels: review

Well I dunno about Rob et al, but I'd certainly be a bit peeved that it wasn't LV's site that got to be first to show the new Premium plane - as far as I know, the first sighting was on the UK Workshop forum courtesy of the UK distributor. Further leaks are springing up in all directions now. However, I was given an embargo until the 25th, which I'll stick to until I hear otherwise (yes, I have begged, er, asked to have it lifted!). I suppose it's pretty impressive that the secret was so carefully kept up until early this morning, UK time.
Posted by Alf at 11:40 am No comments:

So Lee Valley have taken pity and given us something to chew over whilst we await the Great Unveiling next week. Incidentally, this something I didn't know would be unveiled earlier than next week, so I've done some serious speed writing/photography here to get you early info:

Veritas Dovetail Saw @ Cornish Workshop
For the hyper-sensitive, I should note that comparison was made with the LN simply because it's probably the most widely known of the existing dovetail saws, so it acts as a useful benchmark.
Anyway, I just know the reader's going to have an opinion on this one, so I want to see my inbox overflowing with comments! Queries, questions etc all welcome too.
Posted by Alf at 5:11 pm 12 comments:

Email ThisBlogThis!Share to TwitterShare to FacebookShare to Pinterest
Labels: review

Can't stop - just a brief note to advise the reader that a box of goodness has turned up at Alf Towers from a certain tool pusher well-known to us. I can't say much - principally 'cos I don't know how much is known already and also 'cos info is date embargoed ('citing, eh?) - but what I can say is 'Premium'. I can also assure you I will move heaven and earth to get some words and pictures up on same as soon as the official launch has hit.
Keep up your fluid intake - I think there may be some serious drooling to be done...
Posted by Alf at 4:36 pm 9 comments:

The Pursuit of Woodworking

Yes, me again. Oh I know, I just won't go away, will I? Sorry.
The other day I had cause to observe that "you can take the girl out of woodworking, but you can't take woodworking out of the girl". Somehow I'd managed to read the words "slash camp" (don't ask) as "sash clamp". It could happen to anyone. Well not anyone perhaps; but probably any of the readership of this blog. Wouldn't happen to the non-woodworking person who confessed to having looked at my website and "not understood one word in ten" of course, but her loss. Actually I was impressed she got one word in ten, until I factored in the "and's", "the's" and "whoops, that went wrong's". Maybe I need to clean up my writing style a bit...
Ya see, while I haven't been woodworking, the old creative juices have still had to be channelled off somewhere, and I've been exploring the world of fiction writing. It's rather good fun. No, I tell a lie. The chatting with other persons also struggling with recalcitrant muses, "plot bunnies" and trying to balance "fluff" so cloying you're teeth'd drop out just reading the title with "angst" so painful your reader would be as likely to commit suicide as finish reading, that's fun. Having someone to "beta read" what you've written and provide feedback and proofreading is superb luxury. The writing itself is as tortuous as any review ever penned.
Incidentally, did you understand one word in ten of that? No? Now you know how she felt. Why do all these hobbies/crafts/trades have to have their own language? Sometimes I feel that human beings waste about 90% of their brain capacity having to store a glossary of terms...
Anyway, it turns out I write fiction as a sort of combination of review and blog. There's an inordinate amount of checking facts (quite ridiculous for fiction), jokes (natch), a conclusion at the end (frequently unexpected, which is rather less like reviewing) and even a helpful diagram in one instance. Starting with a bizarre premise seems to be a bit of a habit too. It's just a matter of time before fiction embraces woodworking and my current schizophrenic existence is resolved.
So there I am, hobnobbing with entirely non-woodworking persons, right? Exclusively female, what's more, so the odds against are ridiculous. In which case can you explain how it is that my beta reader has started taking woodworking classes (nothing to do with me, guv) and I've just had an email from her wherein she opinions that she "loves the router"? What's worse is she actually finishes projects. Talk about embarrassing... I may have to send her a plane just to side-track her into making whispy shavings and give my guilty conscience a break.
Thus, I give you the pursuit of woodworking. Even when I'm not pursuing it, it pursues me.
Posted by Alf at 9:24 am 4 comments: