Who's That Masked One-Time Woodworker?

An ear-scraping screech as the neglected door to the blog is forced open. Light floods in and dust rises to dance in the unaccustomed sunshine. A lone, unfamiliar figure peers round the door.
Hello? Anyone there? Tsk, look at the state of this place. Where's the "To do" list? One, oil hinges; two, get JCB to help move the dust.
Yes, I still aten't dead, despite appearances. Life and Other Surprises still leaves me in woodworking limbo. Bad enough, but I also have copious apologies to tender to all the people who've emailed over the past few months with queries and such, all of which I've singularly failed to answer. It's not laziness, honest. Well, not just laziness. My brain seems currently incapable of dealing with the technical sorts of things that folks tend to ask. So ten thousand apologies if you're one of the Ignored. It's really nothing personal and I should have at least responded in some form or another, you're right.
Anyway, what can I tell you? The woodworking thing is still there, lurking in what passes for my mind, but not actually managing to force its way to the forefront. Haven't read so much as a catalogue page in months so couldn't tell you the latest trends in woodworking to save my life. As such, I think you'll have to consider this blog on indefinite hiatus (if you haven't already).
Real Life moseys on, in case you were wondering. Alf Towers now rings to the cries of "No!" as our newest inmate, Lucy the kitten, tears the furniture to shreds, so we're kept on our toes. In fact, I think I'll leave you in her tender paws... 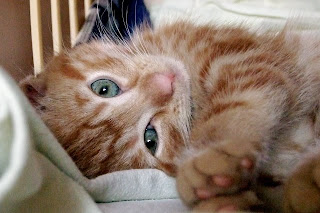