Deary me; I thought I'd left the reader in the lurch for a week tops, and was feeling guilty about that. but it's nearer a fortnight. My apologies, but I've been suffering from a severe bout of JODTAA (Just One D*** Thing After Another).
Alas, I'm in no position to make it up with tales of woodworking daring-do, or even particularly exciting tool waffling. At present I'm - slowly, oh, so slowly - going through this lot of miscellanea:

An eclectic bunch, no? Including the uncomfortable discovery that I seem to be a saw set collector (How did that happen?) and wondering how any one w'shop can end up with seven - seven - glass cutters, and no two exactly the same. But on the other hand it was nice to see an old, old friend again: 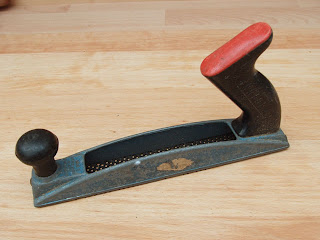 Yes, it's a Surform. Pre-Stanley what's more. Excited, aren't you? I can tell. This was the beastie that acted as my "plane" in my formative years, destroying bits of scrap to make even smaller bits of scrap in my dad's shed. Yup, nothing's changed much in my woodworking aims... The Surform suffers from a touch of the red-headed stepchild amongst most woodworkers, but they're a genius invention really. And make a great "plane" for a kid, because it's light and just all round pretty forgiving of mistakes. F'rinstance it takes real determination to hurt yourself badly with one; worse case I ever had was a graze effect that's not dissimilar to that which graces 99% of all knees under the age of 10 most of the time anyway. Now ideally I'd have liked to be rolling curly shavings off air-dried walnut with my dad's trusty #4 as I made my first breakfront by the age of eleven, but as I was alone, unsupervised, and using bits of old pine with nails in, I think the Surform was probably the ideal tool.
A few weeks ago at the car boot sale I found one of these but with wooden handles, which was, I thought, kinda cool. I was actually tempted to purchase it, but came to my senses. No other Surform will ever really replace your first "plane".
Posted by Alf at 10:00 am