Fairly sure, as I splashed on the bleach, that this poor piece of paper (Clairefontaine 90gsm) was starting to wonder what it ever did to make me hate it so... 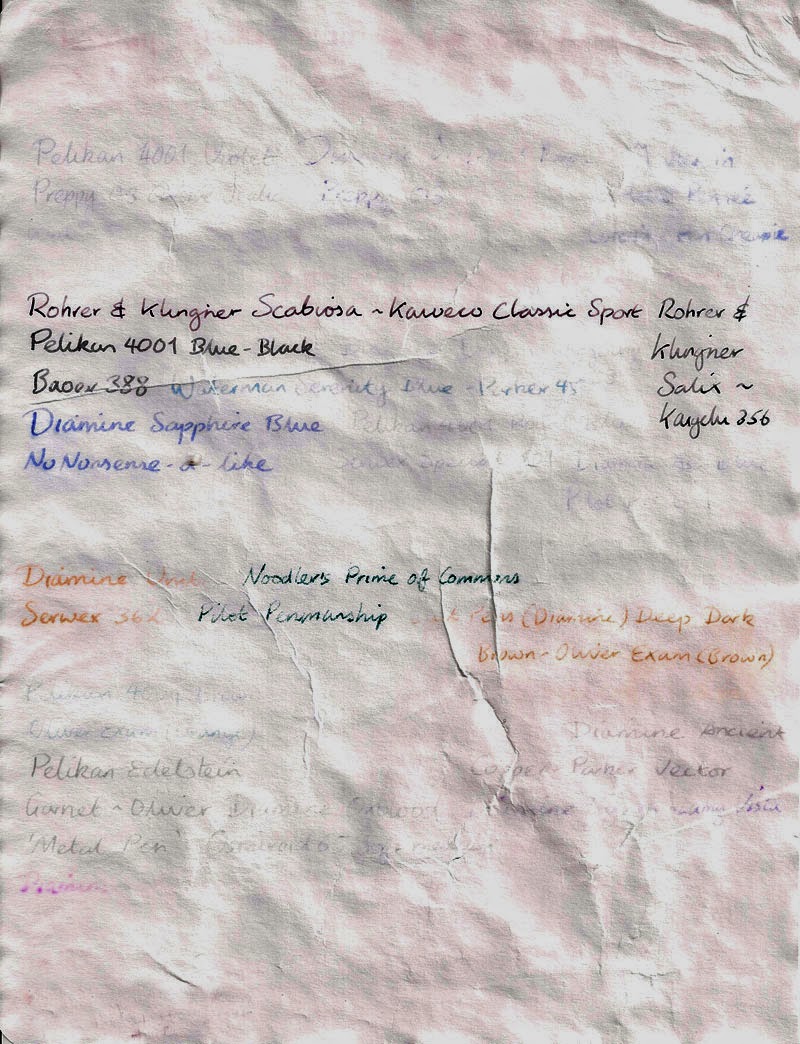 Waaaaay, too saturated. Seriously, I have no idea why it looks so dark once it's been uploaded; most aggravating. Anyway... Both Pelikan 4001 Blue-Black and Rohrer & Klingner Salix have kissed goodbye to what remained of their blueness, Diamine Sapphire Blue still defies all the odds by turning into yet another (slightly paler) shade of blue. I am never putting that stuff in a demonstrator ever. Amazingly Waterman Serenity Blue and J Herbin Violette Penseé still haven't been utterly obliterated either. Ignore the Deep Dark Brown; it's not nearly as legible as the scan suggests.

The clear winner, utterly unmoved, is Rohrer & Klingner Scabiosa. Slightly surprising, but maybe because it always looks like it's already been washed out the difference is less noticeable?

But what of Noodler's Prime of the Commons? Still there, albeit not nearly as saturated as it was (or as the scan suggests). But for me it's a disappointing failure. Let us take at look at the claim for it:

"If bleach is added to the ink when dried, it will turn a bright blue colour to show that a forgery has been attempted."

Now, personally, I consider that's about as bright blue as the original colour is blue-black. Pish and tush; no fun at all.

Also pish and tush because I have no idea why I persistently miss out the "The" in its name. Somehow I got it into what passes for my brain that it didn't have one. Ah well. Do I care? No. If the ink lived up to its blurb, maybe. As it is I shall happily embrace the much more readily acquired European inks with easily-remembered names such as Fernambuk, Rouille d'Ancre, and... Hypnotic Turquoise. (Huh? "Watch the bottle of ink. Round and round it goes. Watch the ink. You are feeling sleepy...")

Can't think of any more ways to torture this paper now, so will retire it to keep as a salutary lesson on transient nature of most inks and to remind myself to take care about the ones that aren't going to readily go away. i.e. Do not write New Year's resolutions in Scabiosa...
Posted by Alf at 11:28 am