Oh deary me, I meant to be posting pictures of successful completion of hole boring by now, but what with one thing and another... But I have recovered the camera from the workshop, so at least I can satisfy your curiosity about that hemispherical object. Wadda you mean, what curiosity...?

It's all because of a cunning "Straight Shooter" jig in the "Cheating at Chairmaking" article in April 2005's Popular Woodworking. Not that it exactly eliminates all skill, but it helps a lot. At least I hope so, but I won't know unil I'm done... Anyway, you put a wee countersink at every stick point in the seat into which you place the hemisphere...

... which is attached to the bottom of your simple straight shooting jig; the upper part of which has a guide hole for the bit to bore the arm that's in line with the hemisphere.

Thus, with any luck, your arm hole angle should line up with the destination point in the seat...

Actually it worked out slightly more complicated than these pictures suggest, so I'll try and remember to take another real action shot when I do the remaining three arm holes and explain what lengths I had to go to to allow for the fact I wasn't using a power drill and thus didn't have a spare hand to hold the jig...

Half my no workshop time has been down to the extreme temperatures therein during the afternoons - about 100°F, but the main inexcusable slacking off was in order to hit the car boots at the weekend. Fine weather and thus rich pickings. My main hope was I'd stumble across a 5/8" dowel bit or improved pattern centre bit for the chair, and for a brief moment on Sunday morning I thought I had. Saturday saw an unexpected visit to my usual Sunday haunt and I snarfed a tapered reamer bit (half a GBP) and a back saw by "Mitchell" of Limehouse for a quid. The latter, with the help of Hand-saw Makers of Britain and British Planemakers, I reckon to be by William Henry Mitchell of Commercial Road, London, operating between 1861 and 1915. I went for it 'cos it has one unusualy large saw nut, plus also the small size handle like the other saw I so recently acquired (but in much better nick).

Sunday saw an trip right down to Hayle RFC's car boot sale, which is fairly large and well attended but I haven't been since 2004. Usually the Tall Scotsman frequents it, but he was not to be seen - at least 3 or 4 other tool people were though, so I had plenty of drool material. Early on I came across the bundle of six dowel and centre bits and for a brief moment thought I'd hit the jackpot, but alas, every other size but 5/8" it seems. I still bought them though, 'cos dowel bits have the advantage of actually being the size they say they are, unlike regular auger bits which tend to be a little oversized. And centre bits with lead screws are a bit more efficient in hardwoods than the cheaper, plainer variety. Anyway, for a pound they weren't exactly overpriced, especially given their excellent condition. 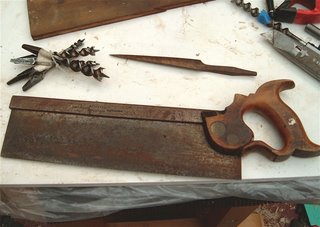 What else did I see...? Well one tool guy had all sorts, but not cheap. I hesitated over a mitre saw jobbie with back saw and mitre clamp combined, but it was missing a shoe on one of the clamps and the saw wasn't great, plus where would I have put it? So I passed. Lots of oval bolstered mortise chisels, poorly rehandled (polyuckathene on funny shaped handles? No thank you), a nice ebony mortise gauge with filed down pins, stack of back saws and hand saws in partially rusty state. All stuff I'd have been gathering up, probably to resell if I'm honest, if only he wasn't charging so much. Nice to see old tools do exist in numbers in Cornwall outside my workshop though... Also fell in with a couple I've bought from in the past, but the wooden plane they had that I thought was going to scratch my moving fillister itch (thanks, guys...) turned out to be missing the depth stop, so I moved on. It was definitely ratchet screwdriver day though; I must have seen 20 and more - funny how one item type tends to dominate on any given day, isn't it? Also saw quite a few chisels, which has been far from the case recently, including a set of Sears Craftsman black plastic-handled butt chisels. Never thought to see those here; kind wish I'd picked them up now, just for the novelty... Anyway, it was a good eyeful of tooliness as far as round here is concerned, so I came back tired and hot, but also happy and not too much poorer!
Posted by Alf at 7:32 pm