So, 2011, and my relentless pursuit for woodworking excellence continues on apace.

What? What's that? Are you laughing, gentle reader?
Yeah, me too... And so it is that my first completed project of the year is not something impressive in mahogany or walnut, but rather the long overdue refurbishment of the "interim" parrot perch. By "interim" I mean "In daily use for the past 10 or so years and I'll be making a nicer looking one any year now". That kind of "interim". For the first 9 years, it went pretty much unmolested, but then beaks discovered what jolly fun it was to excavate brass screws and incidentally isn't softwood nice and easy to chew? The result: 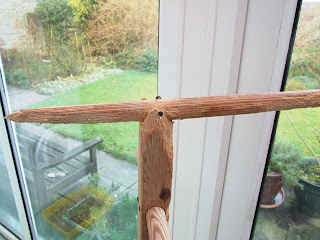 It's not what it was, dear reader, not that what it was was ever much. But at least it used to be slightly more dependable a target to land on. Not something held on by one screw and available for playing see-saws with... 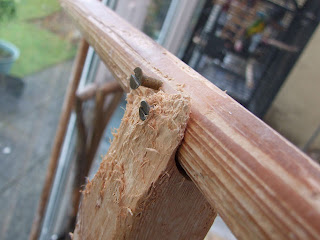 I laid in a suitable broom handle some months ago, and finally decided that as a prelude to rediscovering the workbench top it'd help if the broom handle was part of the perch rather than skulling about in the tool tray. So into the w'shop with this offence to aesthetic sensibilities and out with the saw to lop off the haggard top. 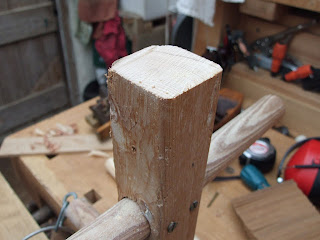 Not bad, considering circumstances meant I had to do the sawing horizontally. I cleaned up some of the worst chewed corners with a large chisel and chamfered the top edges. Next, the new hole for the broom handle.
I elected to opt for a 1 1/8" or #18 Irwin or solid centre bit from my roll o' bits. One of my rolls of bits. We'll say nothing about the boxes and trays. Hardly a duplicate amongst them, I'll have you know... Anyway, for the uninitiated, the 18 refers to the number of sixteenths of an inch that make up the bit size. Thus a 1/4" bit might well be numbered "4" rather than "1/4", a 3/4" would be 12 and so forth. Very confusing when you first come across this and don't know the answer.
Now a #18 bit is fairly hefty and not much fun to drive with a 10" brace, so I bethought me this was an admirable chance to try out the Jolly Green Giant's Favourite Brace. So I did. Aside from the side effect of making the user of the brace invisible to human eye, it's a winner at boring big holes too. I did not so much as break sweat. 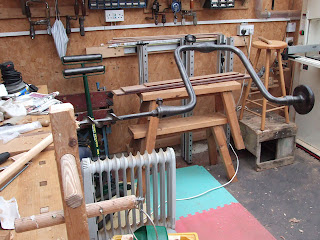 See? A doddle. And straightish too, which was a wonder. 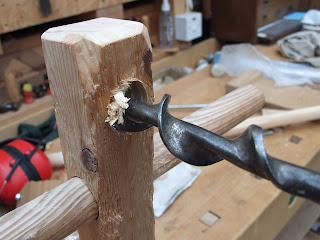 Never being happy with the screws, I decided a couple of pegs would be preferable and less eye-catching to the psittacine mind. They were deliberately angled for a firmer hold. 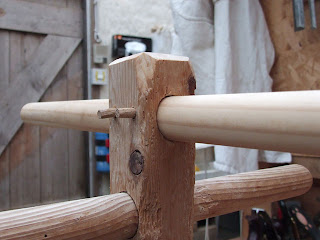 Then sawn off flush. Figured I might as well replace the lower perches too, so it's looking almost respectable. Kind of. 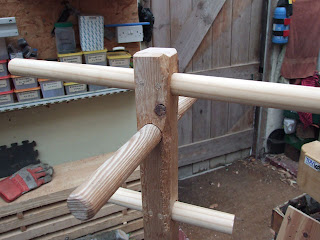 The feathered critics seem happy at least, and that's the main thing. And no danger now of an indignant squawk when someone comes into land and ends up taking the perch with them all the way into a surprise visit with the window pane. 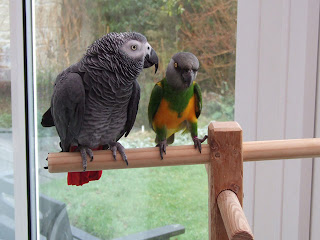 Simple job, but needed doing and at least it was w'shop time. No electrons used, but the "tools used" count is impressive enough:
Slot headed screwdriver
3" double square
Pencil
Panel saw
1 1/2" chisel
Bradawl
1 1/8" Irwin bit
16" sweep brace
2nd cut half round file to tidy up the hole edges
Folding rule
Tenon saw
1/4" drill bit
Hand drill
Dowel plate
Hammer
Flush cut saw
Abrasive papers, various to clean up, chamfer ends, etc
Anyway, actually completing something - anything - is a bit of a miracle start to the year. With luck, the standard of project will improve a bit though. Maybe something that isn't destined to be chewed...
Posted by Alf at 4:50 pm