Have notebook; unlikely to travel

Apparently they reckon four million tablet computers are going to be sold in the UK between now and Christmas. Four million. My mind, she boggled. But then I'd failed to take into account that, apparently, many of them will be for the kiddies. Sheesh. When I was an infant I could whine for the latest trendy gadget 'til I was blue in the face and I'd end up with... a blue face.

Mind you, the latest trendy gadget at the time was a Filofax, and the lack of business contacts to keep track of and international conferences I was attending age ten-ish does, in hindsight, seem a reasonable argument by my parents. Undeterred though, I naturally turned to the DIY option instead. A cannibalised ring binder, some cardboard, and lots and lots of sticky tape later and I had... a not very good DIY Filofax. But it got the thing out of my system at zero cost (apart from the ring binder), I learnt that sticky tape is not the answer to everything, and generally it was a Good Thing, so that was all right.

Probably a bit much to ask the tablet-seeking youth to DIY themselves a printed circuit board and so forth, unfortunately. Perhaps the modern equivalent would be a Raspberry Pi?

Anyway, moving on some *tumpty-tumpty* years, recently I seem to be reliving those glory days of desiring the Trendy Thing, having the financial Powers That Be say "Nope" (The voice of conscience in this case), and turning once more to the DIY option.

The Trendy Thing is the Midori Traveller's Notebook, which is essentially a Filofax but with more elastic. Like the Filofax (and many another Trendy Thing), it promises much; your horizons will be remorselessly broadened and you will likely become a world traveller to rival Alan Whicker just by buying this notebook. Much like the beguiling idea that you'll become really organised by buying a Filofax. Well, no, you won't. But how appealing that it might possibly be so.

What's not appealing is the price, and particularly the cost of the (oddly-sized, and thus next to impossible to get from anyone else) "inserts". Or "notebooks" as the less broadly-horizoned stay-at-home such as myself might call them. So very like a Filofax then.

But it had hooked me despite my better judgement and the Wisdom of Age (yeah, right), and these days with the effects of the aluminium pans kicking in, I really need to make notes of things then and there or they will be utterly lost to me. Plus I find I need a diary; having to keep track of the folks' appointments for this'n'that really wasn't working on my iPod's calendar, because they won't believe it's true unless it's written down on paper...

Anyway, many excuses justifications later I went forth to a) DIY it, and b) Make it a more useful size, and c) Find lots of other people had got their first and the web is littered with instruction on making your own, and inserts to go with it. Huzzah! 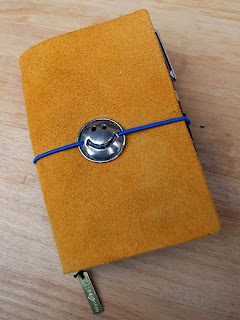 I went with the info at My Life in One Place; there is much there, and a video somewhere that I can't currently find going through it all step by step. A general Google search will find lots of info, videos and etc. The 90mm x 140mm notebook size means it'll take notebooks by all sorts of manufacturers (Rhodia, Clairefontaine, Calepino, as well as Field Notes and the over-hyped but readily available Moleskine), but actually I ended up making my own notebooks as well. 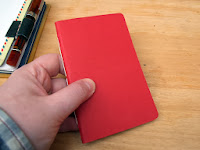 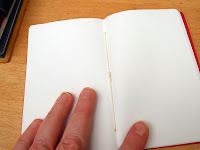 Idiot that I am; shoulda put the knot on the outside. It's a learning process. Also had mediocre success with printing out a diary - it works, but the size won't come out quite right. But hey, wide margins for notes are a feature, right?

The cover itself is rescued from a chisel roll that I have always hated. I pretty much still hate it - the split leather effect is not great, and the colour is... well, yeah - so now I've ascertained this system does seem to work for me, I'm considering actually purchasing some leather that I like to make a replacement (*swiftly gags the voice of conscience before it points out the likelihood of spending more on the DIY version than it'd cost to buy the real thing*). Elastic is 2mm round, widely sold to the beading fraternity. 1.5mm seems to be okay too, but 1mm I found a little too thin. 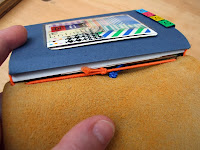 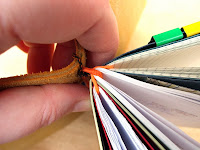 For this pocket sized version, hair bands - yes, hair bands - make excellent extra elastics for joining notebooks together, and have a neat joining metal crimpy thing, thus eliminating a need for knots. Something other than neon orange would probably be preferable, but that's all I could find at the time... 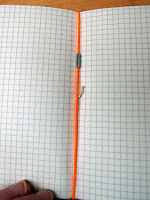 Still very much a work in progress (it's already changed from these pictures), and some improvements needed. Not wildly happy with the current pen holder, f'rinstance - and not just because it's ugly as hell... 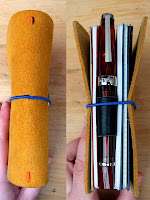 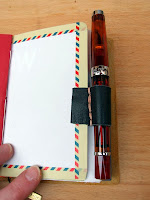 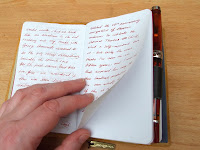 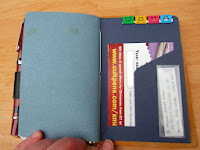 Anyway, all good fun and useful. Oh, and an excuse for some tool use; aside from a leather punch, an in-canel gouge makes a neat job of rounding the corners, and an awl unexpectedly found itself plucked from obscurity and re-designated as a bookbinder's tool.

Bookbinding; now there's a whole other slippery slope... No. Nope. Not going there.
Posted by Alf at 11:38 am