A brief flurry-ette of interest in the expansive bit, so I will, um... expand.
The design I have is the under-every-rock Clark Patent. Here is one in a box I made for it, with label cooked up on the computer - all many years ago now, when I wasn't swamped in too many tools so I could devote proper care and attention to each of them. 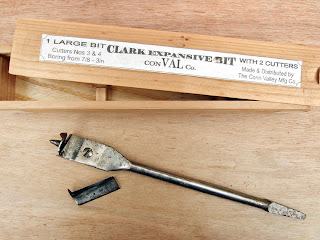 For those not familiar with the beast, the adjustable cutter (outlined in white for clarity) is held with a simple dovetail key set up doodah. Ack, the pictures are worth about 1000% more than any explanation. 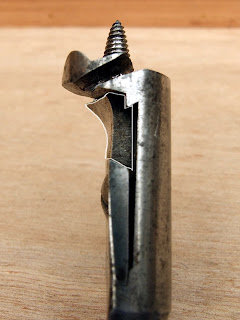 You set the size of hole using the scale provided on the cutters, tighten up the screw and away you go. The Steer's Patent has a rather nifty worm screw gizmo that supplies accurate screw adjustment for setting the size, but this adjusterless design works just fine. I do crave the gizmocity though, but then I'm like that. Always wanting the bells and whistles. 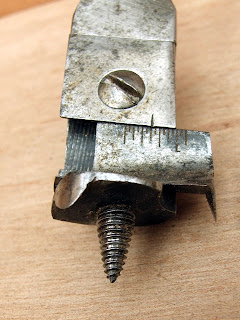 So a few observations on why they apparently don't work and yet were bought in vast numbers and continued to be sold until really very recently.
Firstly, no, they're not as good as a dedicated fixed bit of the required size. But who hasn't needed an odd size of hole occasionally for which you don't really want to have to buy a bit just for one job? Also this compared to, say, a selection of centre bits would have taken up a whole lot less space in your tool box.
There's the second thing; it seems clear they were sold with carpentry in mind. Softwoods. The kind of thing you might pull out on site to make a shallow hole for a bolt head and washer, say. The fine lead screw is a dead giveaway - it'd be a coarse lead screw for hard woods. I know, that sounds somehow all wrong, but fine threads clog in hardwoods. Honest.
Thirdly, depth of hole. I daresay people do bore deep holes with an expansive bit, but really it's just a variation on the centre bit and shallow holes are more its cup of tea. It's not like an auger bit, but more like, um, a router plane. You wouldn't use a router plane to cut a deep mortise, would you? You'd use a chisel. Same with brace bits; auger bits for deep holes every time.
Fourthly, boring big holes is always hard work, no matter what the bit type. Asking an expansive bit to bore, say, a 3 inch hole with only a 10" sweep brace is asking a lot. Especially if you wobble. It's far, far too easy to go off-square and leave the wing cutter with too heavy a cut to try and take, at which point you will come to a grinding halt.
The w'shop isn't really in a state to do anything to wood at the moment, but I did hoick out a ratty bit of 4x2 and knocked out a partial hole of sorts with the bit chucked up in the 16" sweep brace. 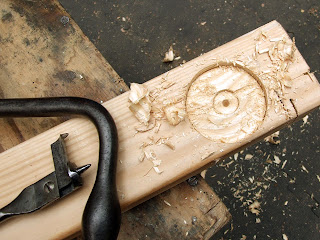 I made life harder for myself 'cos the bit is not as sharp as it might be (which should probably, no, definitely be point number five - and where the devil have I put my auger bit file anyway?!) but I wasn't straining to keep the brace turning with 16" at my disposal, so I could concentrate on boring straight. It's not a pretty result, but even with my large selection of bits, ancient and modern, I haven't the means to bore a hole of similar size any other way. I'd have to buy a hole saw or large (expensive) Forstner bit, I think. And then in any other large sizes I might find myself needing too. No, they're not the greatest single brace bit in existence, but then they weren't supposed to be. They can come in mighty handy sometimes though, and they do work within their limitations.
Here endeth the Party Political Broadcast for the An Expansive Bit In Every Home Party. Vote Expansive and widen your boring options...
Posted by Alf at 3:15 pm