Still ignoring the hunks of lignum vitae disguised as lawn bowls, let me instead talk about the plane as seen in Monday's group shot. 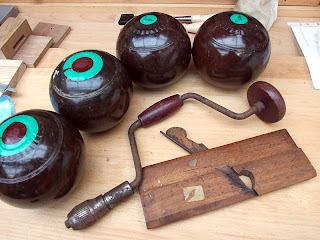 You may legitimately argue that I really don't need any more wooden moulding planes to clean up and not use, and you'd have a point. But this one struck me as potentially useful and not often seen, 'cos look. It's a V plane. 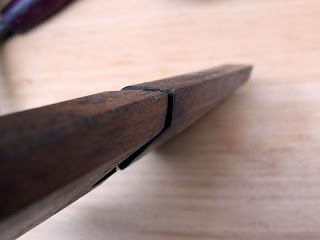 I make it a 67° V, the significance of which eludes me, so I suspect the "looks about right" school of tool making. Coincidentally my very own alma mater. Iron is pitched at 55°, which if memory serves, is "middle pitch" and intended for softwoods. Oh well, can't win them all.

My initial thought was "User-converted Round", but I see that John Whelan in The Wooden Plane lists under "Other Angle Cutting Planes" the official existence of such animals, so I assume they were commercially available. Or else folks were per force reduced to converting rounds as a matter of course and planemakers were failing to say "Oh look, there's a market to exploit." The latter, in particular, a likelihood I frankly doubt. Anyway, Whelan:

A molding plane with a V-shaped sole has no common name in English other than V-plane. These have various uses. A small one is sometimes used to relieve the inner edges of a groove joint to facilitate entry of the mating tongue. The partitions in pigeon-hole racks are sometimes bevelled at their edges and held in place by V-shaped grooves, cut by the V-plane. Fitted with a movable fence, it cuts a decorative groove in matched boards or a groove in panelling as a start for linen-fold carving.

See? Useful. Especially if I get the urge to put pigeons in racks some time. 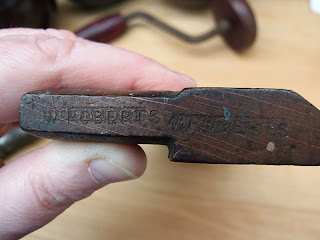 As is so often the frustrating case, a previous user has not only obliterated the name of a user yet more previous, but also done his best on the maker's mark too. But I defy you, W. Roberts, and with some judicious tilting and squinting under various light conditions, I made it out as "HOLBROOK".

To the Batmobile! Or rather the ever-useful 3rd Edition of British Planemakers from 1700. Which isn't as fast, but has lower fuel costs. Although periodically I see what kind of prices that darn book is currently commanding, and am briefly tempted to cash in the gas in the tank, so to speak. Then it comes through with another fascinating bit of history, and I know I'd miss it too much. Anyway, Holbrook.

Hit the brakes! To my extreme delight we appear to have a connection to a Merry Planemaking Widow. BPMs has a fair sprinkling of such ladies, who carried on the business after the demise of their husbands. I doubt they were knee-deep in beech shavings, cranking out the complex moulders - more that they owned the workshop (more often than not, they were living over the shop, after all), and a trusted former apprentice or foreman of the old man's would be in charge of the actual wood butchery.

But it gets better. Back to BPMs:

After 1849 the Holbrook Plane Manufactory was listed under S. Barton in the directory and the subsequent history can be found under that entry. However, it is apparent that they continued to mark the planes HOLBROOK. CO [common]

Okay, so we're obviously going to be opening up the time period on this a little more, although at no point did I get a vibe this was a plane dating from Daddy George's time anyway. Let us repair to S. Barton's locale. It's not far.

Told you it wasn't far. Gets better.

Yep, that's right. Not just one planemaker's widow, but two. These days you'd probably be looking with suspicion at this whole thing and making a four hour mini-series out of it, emphasis heavy on the intrigue and the chances of further planemakers propping up the patio, chez Martha. But we'll assume Martha wasn't a serial terminator of Bristol planemakers, just readily attached to them. Like Marilyn Monroe's character in Some Like It Hot was to saxophone players, but possibly for more practical reasons. BPMs explains some of it:

Stephen Barton was the son of Adam Barton, a saw maker and tavern keeper, whose business (started in 1812 and continuing until at least 1870) was next door to George Holbrook. Stephen married John Holbrook's widow, Martha Lucy, and took over the Holbrook Plane Manufactory. After his death(?) in 1853, Martha Lucy continued to run the Holbrook Plane Manufactory until 1873. As there is only one report of a plane marked BARTON, BRISTOL and numerous planes marked HOLBROOK, it must be assumed that this was the mark used by the factory, whoever was in charge.

Whoever was in charge? Who are we kidding? I'm betting it was Martha Lucy. And what happened to her after 1873? Died, one presumes.