It's blowing half a gale out there and the gods have apparently left their sprinkler running. Nothing like watching the rain being forced past the window seals and splashing upon the fairy lights and there's nothing you can do to stop it; don't you just love this time of the year...? 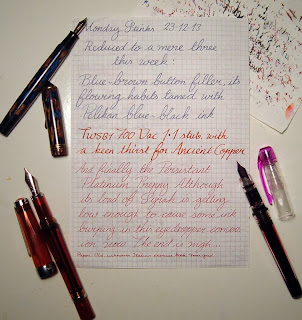 Just the three inks on the go at the minute; the effects of the 13th were delayed a week here at Alf Towers, I had three unhappy pen events in quick succession this Friday instead, resulting in something of a glut of unscheduled pen cleaning. And bluer fingers than is quite usual... As a result:

A) I'm going to stop bothering to try to get along with the Hero 616 (Chinese Parker 51 knock-off homage), because it never returns the favour.
B) Cult Pens are very nearly the Lee Valley of pen retailing. (You may take that to mean they have excellent customer service and are likely to cause severe strain on the wallet. Not that they're Canadian. At least I don't think they are. I shall have to try subtly slipping ice hockey into conversation and see if they bite...)
C) Noodler's Prime of Commons is running out of welcome; being incredibly over-saturated is one irritating thing, not actually being blue-black can be viewed as an idiosyncrasy, but going through the incredibly dry Waterman Kultur like a dose of Syrup of Figs and throwing up into the cap of same? That's simply not going to make you friends here at Alf Towers.

Anyway, best of luck to all readers during this season of over-indulgence and social anxiety

Yuletide Felicitations to you all.

I'll see you on the other side, or maybe even in the middle somewhere.
Posted by Alf at 2:30 pm