Take the rotring Artpen. Please, take it... At least that's been my feeling about the things for many years. I've had a couple of them since my school days, but could never really like them. They're a bit stingy about letting any ink out at all, the rotring ink itself is pretty Meh (the only time the black seems truly black is when it's all over your fingers), and the length of the thing is inconvenient and makes the pen unsuitable for anything but arty-farty posturing. 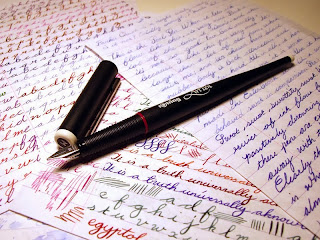 Of course, now I've learnt how to make fountain pens give of their ink when they're reluctant do to do, that's point one solved; as far as ink goes, as I seem to have one or two assorted bottles of that, and have joined the insane ranks of the syringe-wielding ink cartridge refillers, so that's that thoroughly solved. Which leaves the long, tapering length of the thing. Which is a pain in the proverbial. Its little white rabbit tail waves about in the corner of your eye, it won't fit in your pocket comfortably, and you absolutely cannot use it in public without drawing attention to yourself. If only something could be done... 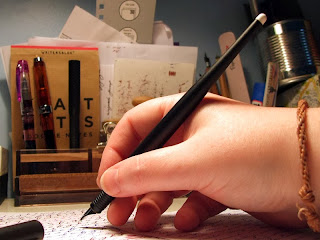 Somehow, it had never occurred to me to cut a few inches off it. What can I say? My modification of tools came after my Artpen years, and it simply never crossed my mind. But now? Nurse! The screens, the Dremel and the cut-off disk. This won't hurt a bit.

Take one Artpen body, thusly. Wrap some tape around it at the point of cuttage, to give you an outside chance of getting a straight line. If you want to use a converter, make sure you allow enough room for it. (Okay, confession time - I probably cut it a little shorter than advisable, but I so hate that taper I wanted as much of it gone as possible.)

Fire up your Dremel and cut. Confounding all previous experience, I seemed to luck into a cut-off disk that actually wanted to stay in one piece long enough to use it. Amazing.

With the magic of image manipulation, you can see the ghostly trace of what once was there. Woooooooowooooo. Spooky. Or not.

Application of a suitable graduation of abrasives will clean and polish up the cut end, but you do get left with a bit of a hole. I tried "popping off" the white end of the cut off bit to fill it, but it's reluctant to "pop". I got there eventually, but another time just cutting the white bit off with the black plastic still attached would be easier. Don't know what adhesive rotring uses to adhere those white scuts, but it's good. Popping the newly liberated white blob inside the barrel and pushing it up into place worked fine, and a blob of my less nuclear-bomb-proof epoxy keeps it in place. 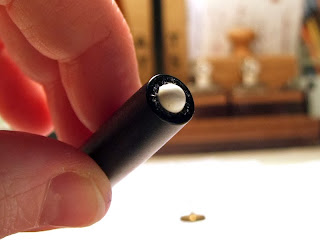 Eh, voila, a rather less conspicuous pen, and one that will actually fit in your pocket if you feel the need to be arty on the go. I also rubbed off the Artpen logo on the side to make it a little more grown-up; either meths or white spirit did the job - can't recall which. 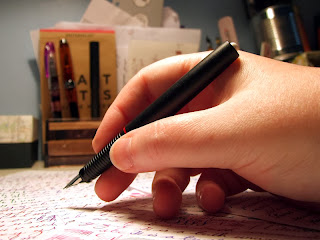 As it happens, I have two - one a medium and one an italic 1.1 - and can swap them between the original body and the new portable version as inclination strikes me. I'm not absolutely sure why I'm keeping one body original, to be honest, except for a nagging feeling that I ought to. This circumstance may yet change.

Now why rotring themselves won't offer a shorter body for the Artpen is something that has puzzled pen users through the ages. Lots of people don't like them as they are (and had the wit to chop the end off a lot sooner), but other than that they're actually a jolly good pen for the money, and now I like mine considerably more than I did before.

And that Dremel cut-off disk is still in one piece. Which, frankly, I find a good deal more disturbing than pen surgery...
Posted by Alf at 9:35 am