Well I'm getting along at a reasonable pace. Or I was. You tend to hit a slow spot when faced with this:

I've done, I suppose, about a fifth of them so far, but I don't want to talk about that - after all, it only means I have four fifths still to do... However, a few bits of interest as I go along, which helps. Possibly the most curious is this one:

Big deal, you say. It's a centre bit. So jolly well what? S Smith & Sons of Sheffield doesn't sound terribly exciting either. Ah, but turn it over and suddenly it's a positively alive with activity. A roundhead screw on the head, a protruding pin on the shank, and a threaded hole.

Into which fits a knurled bolt that holds this depth stop. 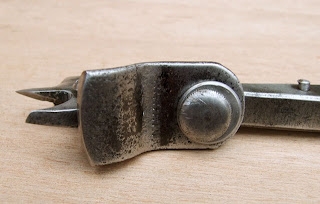 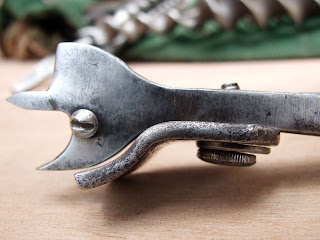 A sharp, used, apparently ordinary 1" centre bit with an interesting role. I wonder what it was? I haven't really made any headway in seeing if I can find out yet, because honestly, I'm not sure where to start. Kinda cool though, eh?
I'd suggest there might be a twist in the tale, but I haven't even started on the augers yet...
Posted by Alf at 5:18 pm