Further to the Further Adventures

First, electrolysis. Coupla folks have mentioned it, and pretty much someone does every time I play with citric acid. I know many folks swear by it, and it's probably brilliant. But I am fundamentally a coward, and as far as I'm concerned electricity and water don't mix. 'Course, if I happened to have the means to try it about my person, I probably would have been tempted, but as I don't, well, it seems a pricy option to go out and buy a battery charger in order to do so. So yes, I believe you, but no, I haven't tried it and have no plans to.
I should also have probably clarified that I don't actually like any chemical form of rust removal at all. The end result always looks just that little bit bleugh to my eye. Only the serious "Oh dear" cases that are absolutely hopeless without drastic measures will get thrown in the soup. My first thought is always can I do the job with the lightest possible abrasives, because to me, it simply looks so much better. But that's just me. For example; one of these ball pein hammer heads has never been in any soup, the other has. Go on, guess which. 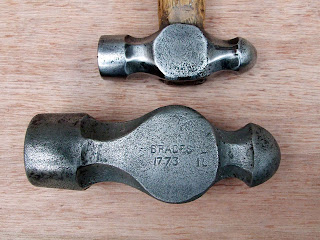 Anyway, I put a couple of sacrificial spanners in their respective soups for 24hrs. Notice how much darker the Restore solution on the left is getting compared to the citric acid on the right? 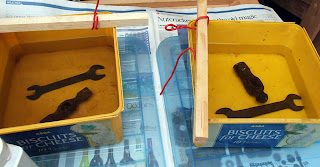 Then fished them out this morning. First observation is that the Restore victim on the left is much blacker. 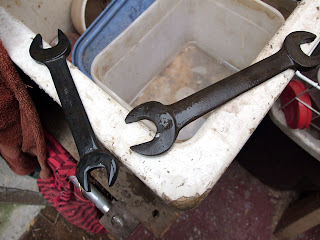 A brief scrub under running water, and the second observation is how flippin' cold the water is... Third, and more useful observation though, is that the black comes off the Restore one a lot easier than the citric acid, and leaves a more liveable finish. Not pretty, but liveable with. 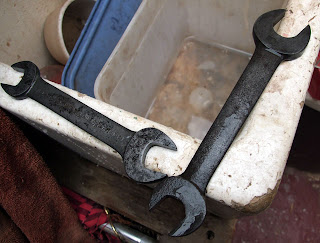 Now whether this is because the citric acid clings to the blackness, while the Restore seems to release at least some of it into the solution, I don't know. Or has the citric worked faster and got to a later stage than the Restore? i.e. Buggered up the metal a lot quicker... I do get the gut feeling that the citric does move a little quicker from some of the other things I've been cleaning, but it could equally be a happy or unhappy coincidence of certain steels that react more dramatically happen to have ended up in the citric acid bath and not the Restore. I honestly don't know, which is why this is strictly "workshop science". i.e. Not science.
Anyway, polished up, they're both pretty equally revolting; the citric acid may have just pipped the Restore to the post of horror though. Bottom line - don't put stuff in for 24hrs unless you really, really don't care how they look. Or possibly if you're sharpening a file or rasp. Ooo, ought to try that too. 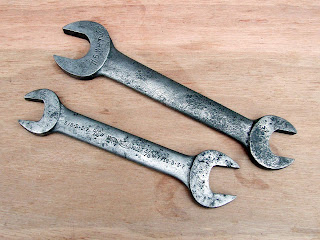 A couple of pairs of pliers were also cleaned up and then re-dipped in the Restore solution and allowed to dry. It's classical West Country weather down here - fine steady rain - so if they're gonna rust, they've had plenty of opportunity. So far, they haven't. I'm impressed. 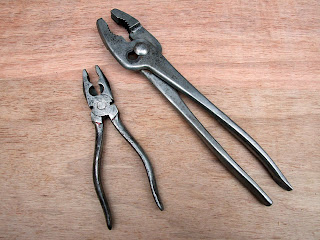 The pair on the right are apparently Billings model M slip-joint combination pliers. c.1911-1926. Fancy.
Finally, the identification of the dividers. Brian hazarded a thought that it might be a J. So did I. And a G, a D and even an F at one point... BugBear, however, did something about it and wrote a program that created a search string for each possible letter, which he then applied to Google. All way over my head of course, although I can't help loving the irony of it all to find out about a hand tool. But if you want to find something via Google, he's your man - and he did.
"I found a J T Jolley in google books;

Hughes Joseph, toolmaker (J. T. Jolley & Co) Brookfield Cottage, Latchford."
Plus a rather fancy Lancashire pattern hacksaw.
Armed with this info, I did a quick search of the Trade Directories but only came up with one likely entry in Kelly's Directory of Cheshire, 1902; Jolley & Co, Ironmongers, 19-21 High Street, Crewe. Nothing in earlier directories at all in that general area (i.e. not just Cheshire), which was a bit disappointing. I may have another go and take a more manual approach though; I have less faith in the power of the search engine than BugBear.
Phew; think that's covered everything. From this you might have guessed that my choice for box number two was the hammers, mallets, screwdrivers, etc. Going pretty well too, if we put aside the number of handles various I now need to make...
Posted by Alf at 10:29 am

Email ThisBlogThis!Share to TwitterShare to FacebookShare to Pinterest
Labels: rust