Occasionally I delude myself that I've got a bit of a handle on this old tool business - and then I clean up some auger bits and confusion descends like a familiar cloud.

Auger bits are not simple. Auger bits are complicated little blighters. F'rinstance, early in your auger bit orientation you've probably come across the revelation that lead screws can come in coarse, medium and fine. You may have tripped and fallen in the quagmire that is the uncertainty over whether coarse lead screws are for soft woods and fine for hard woods, or... not. But it's not even as simply confusing as that. Take the lead screws on these two Cornelius Whitehouse and Sons Jennings pattern bits. At least I thought they were Jennings pattern, although they surely don't look like it in the picture... But that's not the point. #11 on the left, #10 on the right. 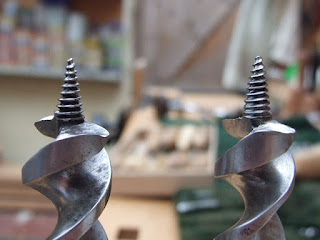 The lead screws appear to be much of a muchness, no? Yes, the one on the left needs a little attention, but that's not the point either. Well it is the point, but it's not the point.

Wrap a length of cotton thread round those screw points, why don't we? Top tip of the day there, incidentally, and possibly the only useful thing you may glean from this blog entry. Having wrestled and sworn over trying to trace the spirals with a marker in the past, it dawned on me that a piece of thread wrapped round the, um, thread, did the job in a fraction of the time and inconvenience. Unless it occurs to you that the nearest piece of thread is the loose one on your shirt and you start pulling, at which point your inconvenience quotient can increase dramatically. So don't do that. Anyway: 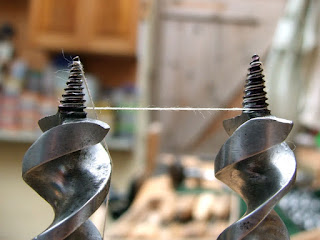 Well that's where I get confused. More confused. It means the thread pitch is coarser than it appears. I think. But the number of threads is doubled for better grip, maybe? If so, in what exactly? Which lead screw is preferred for what type of wood? Does it matter? Do I even need to know? Most books, however ancient, and the few catalogues I have are all oddly silent on lead screws and the differences in same, so maybe it's no big deal. But I can't help wanting to know, and so I wonder. In circles.

Around this point I feel a headache coming on and silliness ensues. 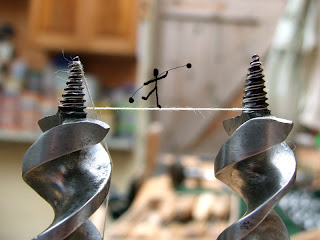 Oh come on, I can't have been the only one thinking it.
Posted by Alf at 2:01 pm

Email ThisBlogThis!Share to TwitterShare to FacebookShare to Pinterest
Labels: rust