I wanna tell you a story 2

In the first instalment I left you hanging from a router-infested cliff; would our heroine survive another encounter with the Power Tool of Her Nightmares? Read on...
You may imagine how I agonised over the whole thing, my record being what it is. But I made a template and used the guide bush and it was... okay. In fact it was fine. I managed to be a muppet and lightly graze an area of bench top I didn't want to, but nothing serious. 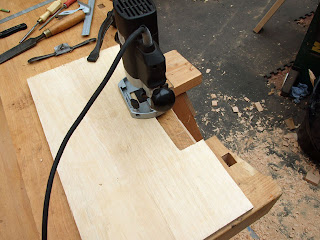 And there it is. Not bad, eh? I could almost - almost - learn to like the router if it always behaved like that. 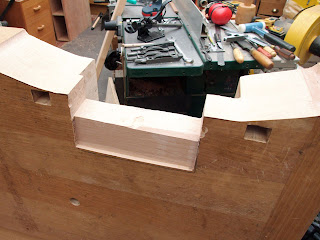 Next step was to fit the hinged mounting plate to its recess. A matter complicated by the fact that it's been repaired with a weld at some point, so all sorts of relief in odd places was required. I procured a candle and sooted up the plate so I could see where I needed to remove wood and where I didn't. Viz. It's not pretty, is it? A very real work in progress shot, that. 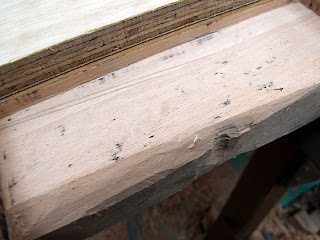 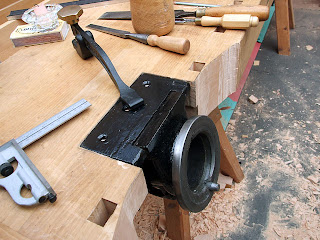 So I had to try it with the jaw in place too, didn't I? A word of huge love and affection for the Veritas hold down; it made the job 2000% easier. It just sat there in its hole and held that hinged mounting plate in its recess like a champ. Without it I would have gone even more insane than I did anyway; with it I could hold the thing in place while I endlessly fiddled about. 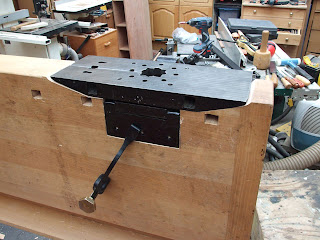 Even to the point of putting the front jaw in place. Which reminds me; another tip I found somewhere was to install a screw so the hub rests on the head - that way to can make sure your rear jaw is at 90° to the bench top. Very handy. 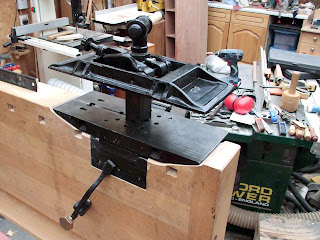 With the beam in situ, I was able to mark off where I needed to remove yet more precious bench in order to be able to close the vice at all. 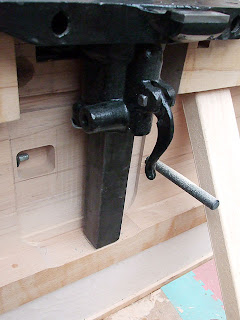 At this point I almost had a functional face vice, but of course it wouldn't rotate for toffee.
Posted by Alf at 12:06 pm