An exchange on one of the woodworking fora over the weekend reminded me that I don't think I've ever shared a particularly useful, but oh-so-ugly, homemade tool that lurks here at The Towers.

I call it the Thing.

As in "Where's the Thing?", "Oh, the Thing will do that", "Good grief, I really should make a nicer version of this Thing". It's not so much a tool for woodworking per se, although it's been used on a fair few handles in its time. But there are very few pre-owned tools in the w'shop that haven't been on the business end of The Thing at some point.

Yes, this is the glamour shot. Envious, aren't you? Even with that little bit of damage to the custom-made handle, the Thing exudes toolish loveliness.

No? Well, no. It is pretty darn hideous.

It came about quite by chance, many years ago. Early in my learning curve of cutting up old saw blades, I ended up with a new plate for a Sorby 18in panel saw, a number of scrapers, some scratchstock blades (in potenia) - and a 5in length of really vicious splinter-like saw plate. Somehow the usefulness inherent in this utterly fortuitously created piece of steel grabbed me immediately, and I kept it.

Within 20 seconds, I gave it a handle from electrical tape. Go on, wonder why... 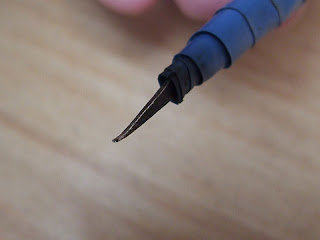 One end is pointy and can get into all sorts of little areas of tools that need cleaning out. Screw head hopelessly gummed up with the detritus of the centuries? The pointy end of the Thing will clear out the slot in a moment. So much gunk in your knurled chuck you'd think it was smooth? The Thing can, with applied patience, do a cracking job. And so forth; you can probably easily imagine the sort of things it helps with. For a while I used to use an awl for those kinds of jobs, but why spoil the awl with such work? And anyway, often the shaft of an awl widens too quickly to fit in the necessary hole. The edge of this end also works pretty well for scraping widish areas. 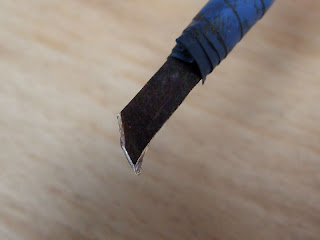 The other end provides the scraper element. You can push with the end, or pull with the hook. Many a paint spot on a tool has been popped off with this, and you know how old tools were always apparently owned by Jackson Pollock when it comes to paint splatter. The point of the hook also comes in handy, especially when you want a very controlled movement to avoid creating damage on the surrounding surface. Just treated like a carving knife really.

Of course, after many years of service, those viciously sharp edges are getting rounded and not quite so effective anymore. On the other hand, a less aggressive edge/point can be equally useful to have. So rather than refresh the edges with a file (which does rather strike me as faintly ridiculous) I may have to actually see if I can deliberately make myself a new one.