Whilst diving courageously into the depths of the Drawer of Doom without the aid of a safety net, I ran across an old sketch book of mine that I haven't seen in years; yea, even unto having no memory of it even existing. Most of the contents dates from the summer of '93 and a holiday up on the Cornwall/Devon border. For woodworkers, that geographically translates as "Near David Charlesworth's". I recall it because the cottage had no television and I was missing the final Ashes Test of the series at the Oval, and the only one England managed to win (cricket, 'Murricans). It rankles still, as you may be able to tell.

In amongst the various landscapes and coastlines, it seems a bit of woodworking caught my eye. In a "Oh, good grief, the builder of this gate overdosed on the rural rustic charm before building" kinda way. Nowadays I'd be taking more notice of the gate (not least, getting the perspective right - pretty sure it wasn't actually as warped as that sketch suggests). Rather a nice change to have the sweeping top rail. I recall that robin did actually pose exactly like that, in the way of British robins. I gather that continental European robins remain the shy woodland creatures they're supposed to be and do not leap on every photo opportunity presented to them. US robins, of course, are quite another thing and three times the size; as witnessed by the one nearly breaking Julie Andrews' wrist in "Mary Poppins". 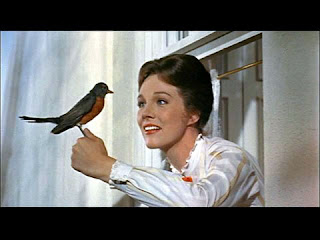 Ooo, I found a legitimate reason to blog Julie Andrews; that'll be hard to top. Also it's an opportunity to point out that Dick Van Dyke's "Cockney" accent isn't the only thing in that film to make a true-blooded Brit curdle at the edges.

Where was I? Yeah; sketches, the past, where did my vague ability to draw go? Stuff like that. Sigh. When did 1993 get to be nearly twenty years ago anyway? I'm getting to be as old as I feel, which is a trifle disturbing...
Posted by Alf at 1:07 pm