Will you look at that - a week down and still going. It's a miracle, I tells ya.

So, just for a change, I can ask you to cast your mind back a mere week rather than several years, and my confession concerning the state of my wood stocks. I keep stuff. Lots of it. Little bits. Really little bits. I tell myself "Hey, that might come in for something one day, you never know" far too often to be wise. In the spirit of admitting you have a problem being the first step to overcoming said problem, I thought I'd take a picture. I got this far and got side-tracked. 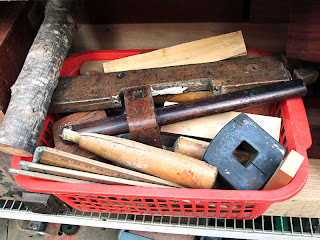 See, this isn't the worst squirrelling of paltry pieces of p-, er, wood, by any means, but it is the one that might upset some folks. It's not that long ago that it would have probably had me grinding my teeth a tad. It's where tools go to die. Well, wooden bits of tools, and more specifically rosewood and boxwood.

It's here where the wooden subjects of that tricky decision between restoration and recycle end up. That four-fold rule? I have all the parts, but one of the hinges is trashed. Maybe I could have tried fixing it, but on the other hand, at some point a short length of rule with inch markings may be exactly what I need. (Crivens; there I go again...) And failing that, well-seasoned boxwood, kids! The chisel handle was split and missing a chunk; once upon a time I might have sweated over repairing and replacing, but instead I've already had a couple of nice wedges for restoring a panel gauge out of it and there's still plenty to come. That husk of the Masons' Boxwood Plumb and Level had split where the screws had rusted, so donated its parts to its brother who was in slightly better condition and now back in fully working order.

But there is one still slightly teetering-on-the-line tool in there that's now been drawn to my attention. That gauge. At the moment it's just stock (beech) and stem (rosewood), and I can pretend it's just bits of wood and not another thing that should be on the To Do List. But really all it needs are two wedges and a blade (for I would guess it was made as a cutting gauge). And I do happen to have some suitable bits to make the wedges with, after all...

I could really go off this blogging every day idea, y'know...
Posted by Alf at 12:04 pm