So, this 'ere plane then. Colloquially known as an "infill" or, sometimes, as a "heavy sonofa-".

This example is 9" long, a full 2 5/8" wide casting (no dovetails here), with a hefty 2 1/4" Thomas Ibbotson & Co. tapered iron. Stuffed, I believe, with rosewood. Weight is... heavy. I haven't put it on the scales, but you certainly wouldn't want to drop it on your foot. Or even pick it up much, to be honest.

And before you ask, yes, those are spots of rust. No exclamation from you about it will compare with the curses I directed at myself when I saw them. It has been an exceedingly wet year, but still... Horrors. 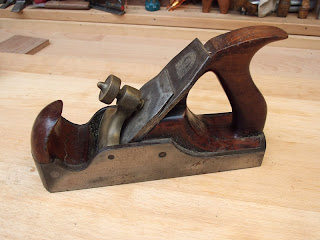 Now, whilst Mr A was spending his formative years learning to be a joiner and offending his mother with talk of "stuff", there was a Mr H. W. "Harry" Harrison also labouring in the workshop. Whether he was a Harold or Henry, I don't know; mayhap he was a Hubert, Horace, or Horatio and the "Harry" came about merely from his surname. History is silent on the matter. Whatever his given name, my notes from conversation with Mr A tell me he passed away in 1950, which is probably when Mr A came into possession of this beast. Now my notes also tell me that Mr A was born in 1930, so how he afforded such a thing at such a young age, we can but speculate. Maybe it went cheaply because, at some tragic point, its nose had hit the w'shop floor and broken off the unusually curly front bun. 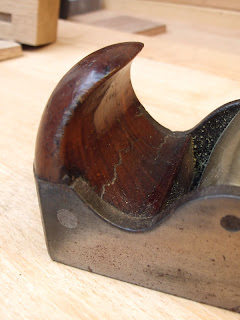 At least it's unusual to me; I've never seen one like it. But possibly this is the moment to confess that my interest in infills is... lacking. Quintessentially British tool evolution it may be, but I can't get excited about them hardly at all. So odds are heavily in favour of someone reading this being able to tell a lot more about it than I ever will. Feel free to share, if you do. 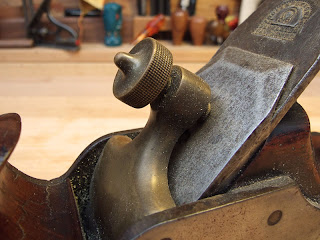 F'rinstance, the expert may look at this lever cap and be able to tell you who's catalogue Harry ordered it from. For Harry is said to have made it, and honestly, apart from the vulnerable choice of front bun design, he made a pretty damn good fist of it. 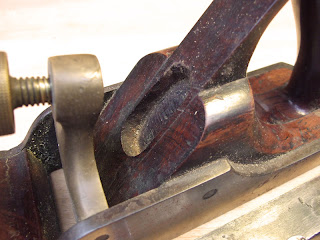 Which brings about a question in my mind; joinery does not usually conjure up infill planes and rosewood. It's more windows, doors, stairs, maybe some mahogany? So I wonder what Harry had been doing in earlier years? Perhaps advancing age meant he could no longer do the cabinetwork he'd done in his prime? Or maybe the post-war era just needed more joiners than infill-weilders? No idea, but I can't help speculating. Go on, try and stop me. 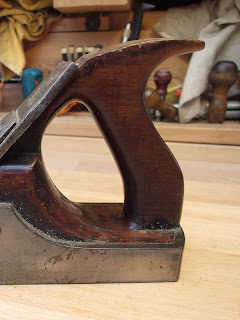 You can see how far down the top of the iron rests against the rear handle; it's a well worn tapered iron, and as a result the mouth is considerably more open than modern tastes would like to see. And probably traditional tastes too. I love the neat fit of the infill into the casting at the heel, and the handle itself looks shapely enough... 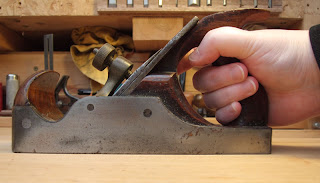 But really no picture could possibly convey just how uncomfortable I find it. Oh, I see you rolling your eyes and muttering about "Alf and her handles" again, and yeah, perhaps. But in the search for the perfect finish I reckon Harry thinned the thickness of the handle down too far, and it bites a bit. Otherwise, you can see it's a pretty roomy grip, which is not always the case with old tools.

So that's the only infill bench plane in my possession. Occasionally I think I should probably sell it to someone who'd appreciate it more, but then I think I really ought to have one (British and all, old boy, what, what), and I'm never likely to acquire another, and any financial gain is likely to be far smaller than the nagging dissatisfaction I'd have about selling it. So, I keep it. In theory I know about 3000% more about how to make it go than I did ten years ago when I acquired it, so maybe I'll have another go at it some time and see if the scales fall and I gain a better appreciation of why folks get so excited by infills.
Posted by Alf at 10:09 am