Tarnation - I missed November. Botheration. I dunno, this year seems to have flown by on a month-by-month basis, while absolutely dragging hour by hour. Most peculiar.

Anyway, December. Possibly my least favourite month of the year, and this one has started out right nippy too. Urgh. I might try and post every day in the run up to the "Winter Festival", just to see if I can. Woodworking will be the first choice of subject, but it probably depends on how desperate I get for Blog Fodder, because, naturally, I haven't planned ahead. Of course, by now, I'm probably back to talking to just myself and all the spammers anyway, but, hey, that's never stopped me before...

So the foundation of woodworking is, um, wood. Timber. Lumberrrrr. "Stuff", as they say in the joinery trade, in an effort to blind us with technical terms. Casting my mind back several months (like twenty) I remembered the piece of possibly-Mahonia that I cut open to reveal a rather stunning yellow. Here 'tis. 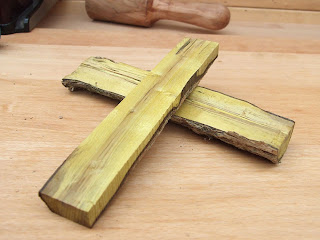 Well, I wondered at the time how it would age, so hustled down to the w'shop to dig it out after twenty months exposed to the air and UV light, and here's the answer. On the left, the back that was deliberately kept face down; on the right, the face side, roughly planed. 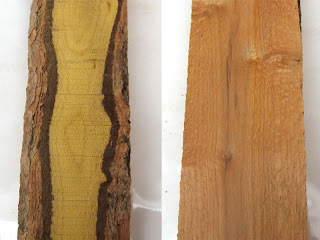 So, definitely mellowed even out of direct light, but the face side has gone a rather lovely but less remarkable golden brown. Not terribly surprisingly. It's a bit reminiscent of aged Boxwood, and has similar tight grain - grows just as slowly, so again, not a shocker. Unlike Boxwood, it doesn't have that slightly buttery quality when worked though. Figures. Still, it cost me nothing but my time, and it's bound to come in handy some time. Things always do, however small.

And that philosophy right there explains an awful lot about the state of my wood shelves...
Posted by Alf at 7:19 pm