So mentioning "stuff" yesterday, reminded me of one of my old tool buying encounters. One of the things I miss most about not being on the tool hunt any more is not the actual tools so much, as the people you meet. One such was a gentleman, Mr A, with an assortment of surplus tools from his early years as a joiner. He recalled starting training as a "setter out" in a joinery workshop, and on being asked by his mother what he'd learnt, he eagerly explained how he'd been told to take some 6" "stuff" and... Only to be chastised by his mother for using such an inaccurate word as "stuff", and no amount of protestation on his part would get her to believe that was the proper term. 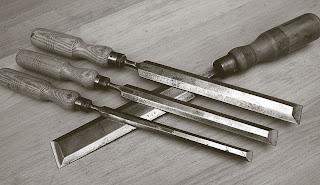 Looking back at my brief notes of the time, I see his father had worked at William Greenslade's, the planemakers, in Bristol, and he remembered seeing the paring chisels used for cutting the escapements. Polished all the way up the back (for you folks who think that's merely a modern affectation), and pushed with the shoulder. If I recall correctly he said as the paring chisel approached the point of being too short a length for the job, the unhappy planemaker would start the laborious job of lapping the back of the replacement, spreading the work over several weeks or months. I seem to be spreading that particular work over several years, myself... He also claimed the beech plane blanks were stored in the rafters to season for ten years before use. Can't see the accountants smiling on that idea these days, but certainly I have no complaints about the examples of Greenslade planes that I own.
Posted by Alf at 1:45 pm