Ten years ago I was looking forward to the Axminster Show. Sigh. Good times. 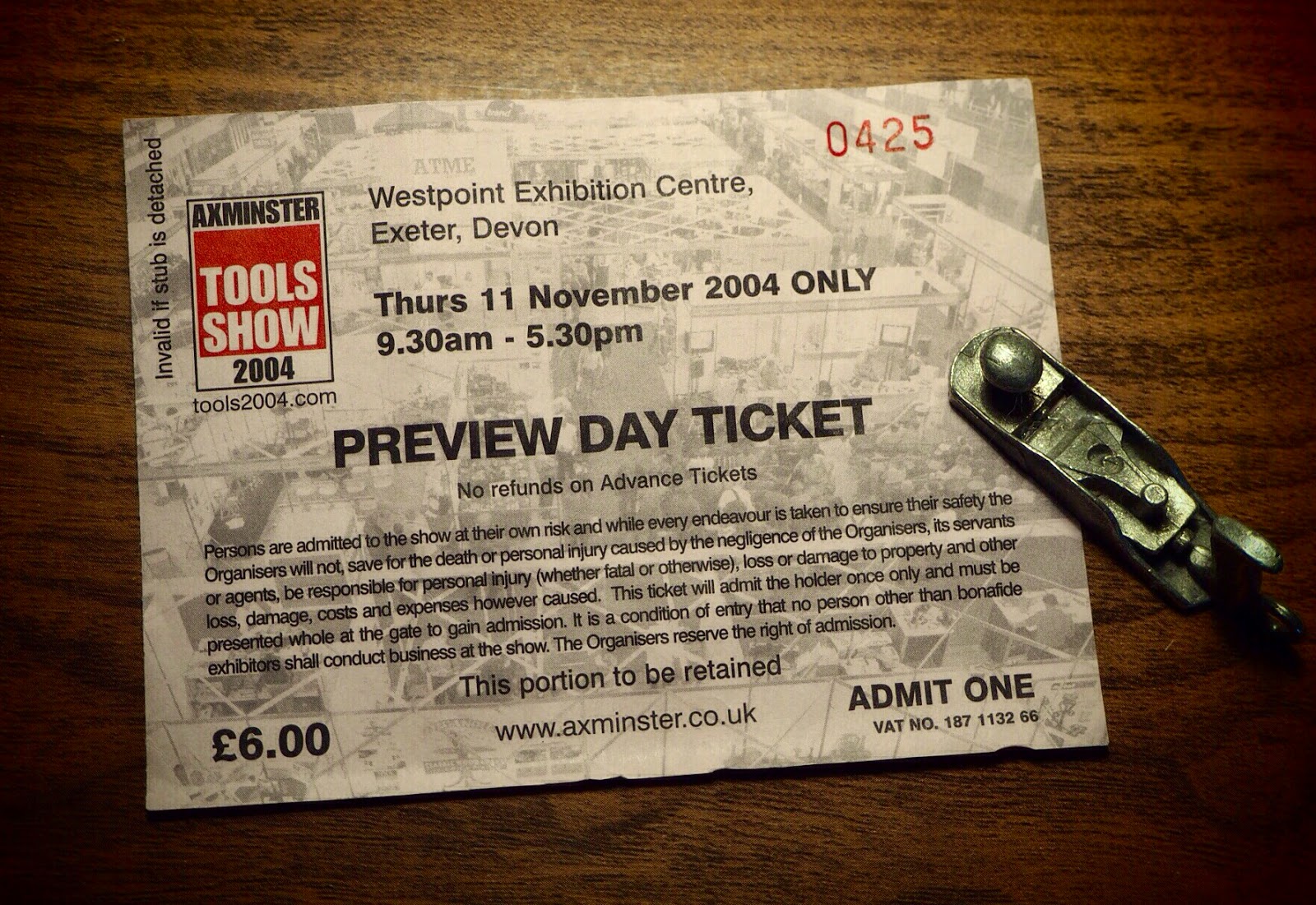 On which anger-management-challenged note, having finally crawled to the nice round figure of ten, I go no further and will be moth-balling this blog. The decision was up in the air for a while, but when even an on-topic post concerning a workbench goes unmolested methinks it's long past its sell by date! So thanks for your company over the years, and may your edges remain sharp but unbloodied. ;) 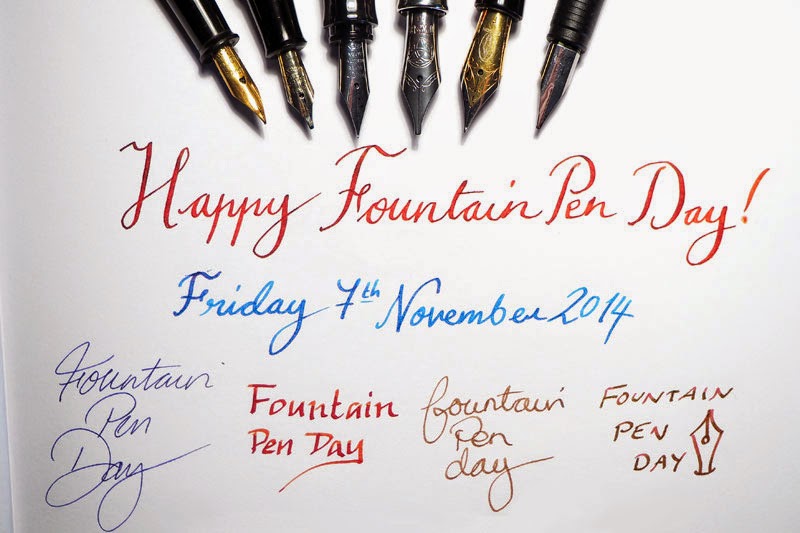 I believe I've mentioned this before, but you can't do this with a ballpoint.

Put the fount (and the ain) back into your life and pick up a fountain pen. Heck, a disposable one will do - they're really very good and zero maintenance. Look for Pilot V-Pens (or Varsities, if you're in 'Murrica).

Right, I'm away to drool over some inks and try not to give in and buy any. Good luck with that, I hear you perspicaciously remark...
Posted by Alf at 11:45 am No comments:

In celebration of Friday's Fountain Pen Day, a brief return for Monday Stinkage. (Just when you thought it was safe to go back to the inkwell...) Evidently I still haven't got to grips with the best way to capture ink colour. Ah well. 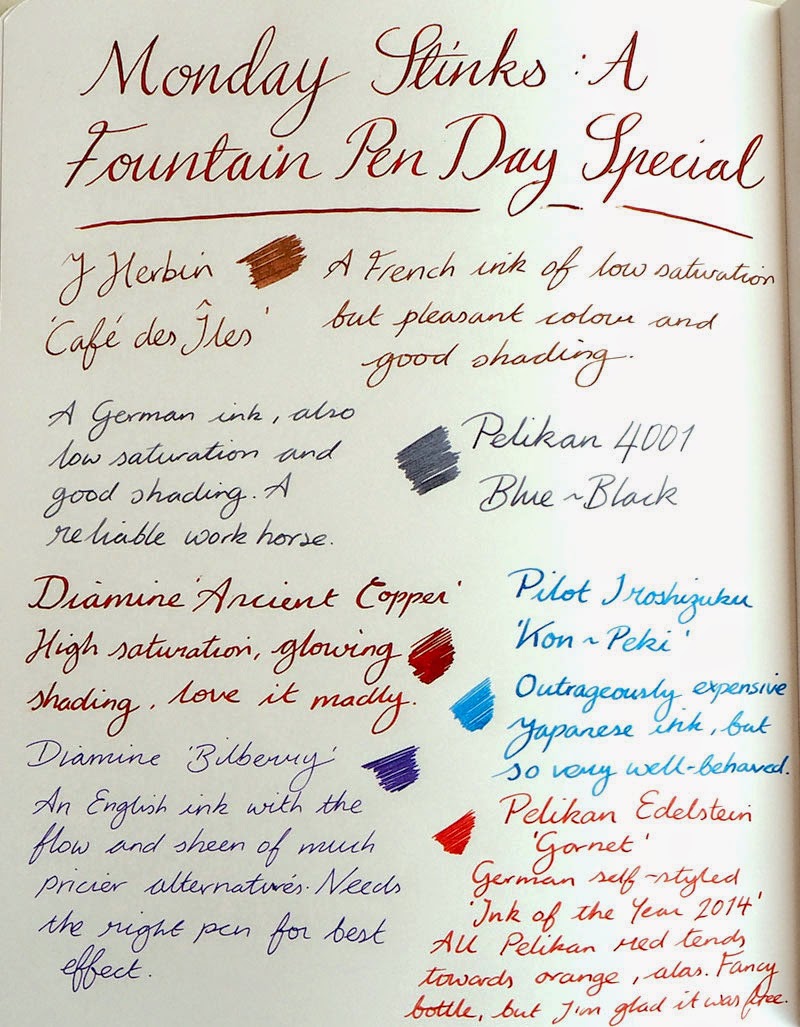 J Herbin Café des Îles is not a remarkable ink, but a pleasant one, and it looks great on cream paper. It seems to go well in a Bedrock Flake Edison Beaumont, currently sporting a fine nib reground by moi to be a little italicised.

Pelikan 4001 Blue-Black has pretty much taken the post of everyday ink at the moment; you just don't have to worry about it, and it has a soupçon of water resistance which can be handy. Currently living in the M200 Pelikan, which boasts being one of the few pens I haven't butchered customised.

Diamine Ancient Copper does not photograph well, which is a crime. So much better in the flesh, and possibly just a bit too wet to bing out its best coming from the Indian Gama Airborne with substitute Onoto flex nib.

Diamine Bilberry I really didn't take to at first, but once you get used to more lubricated inks and sheen effects, it comes into its own. Arguably a Pilot extra-fine nib in a Kakuno is not the best way to show it off, but as writing experiences go with such a fine point, it's hard to beat.

Pilot Iroshizuku Kon-Peki seems to be pretty much the Iroshizuku everyone ends up with (if they end up with one at all), and it's nice enough. I'm not sure that the considerably cheaper Sailor range of inks aren't just as smooth flowing and well-behaved though, just not always so widely available. The restored cobalt blue and bronze button filler of unknown parentage is currently enjoying this particular tipple, because naturally the no-name battered old thing should get the premium ink...

Finally Pelikan Edelstein Garnet, an ink I dismissed as utterly without upsides (apart from being a free gift), until it caught my eye as I was chucking out a finished scribble notebook. What gorgeous glowing red is this? I exclaimed. Deduction lead to Garnet being the only possible answer, so I gave it another chance. Once you get your head into the idea that, where Pelikan is concerned, red will aways tend towards orange, it's better. (Their 4001 "Brilliant Red" is basically a day-glo orange with a hint of red that will sear off your retinas if looked at for more than 1.03 of a second. I'd ink something up with it and show you, except Fountain Pen Day is about encouraging FP use...) But it is not a great ink, despite its fancy perfume-bottle-like presentation. Currently dwelling in a battered Parker "New" Duofold (c.1953-61) whose nib was so worn to the previous owner's hand that drastic measures had to be taken to make it usable. Purists would, probably justifiably, frown. Purists may go away and stick their heads in a bucket. Probably by Montblanc.

Anyway, there we go. So yes, the pens are still getting a workout; zibaldones are getting finished at regular three month intervals, plus I'm attempting to learn/relearn/stop-mis-remembering some French, and there's nothing like writing it down to get it sticking in the memory, non? (Je dis oui.)
Posted by Alf at 2:54 pm No comments:

You know your blog posting is sporadic when the layout of the post composition page seems to have changed every time you log in...

I should put that on a t-shirt. By necessity, it'll have to be quite a large t-shirt.

So October was fairly disastrous; technology failed me, and me failed me. As always seems to be the case, despite having a social diary to rival an Olympic-grade hermit, I succumbed to that well-known ailment "There's a lot of that going about". Well it was going about, but then it decided it liked the amenities, so stayed around, moved in all its DVDs and toothbrush, and pretty much hasn't gone anywhere. Ho hum.

Meanwhile, my friendly neighbourhood aliens, BT Open Reach, have been playing silly bu- bothersome telephone engineer games and have left me to bask in such download speeds as 70kpbs and the like. Yes, that's Kbps. That's... slow. I can't recall if I've previously shared my theory about Open Reach engineers and the protective ring that is put about them so you can never actually speak to them directly? My assumption is that they are, in fact, all members of a telecommunicationally-gifted race of aliens who crashed landed on Earth, can't fix the spaceship (but their 'phone line to home is crystal clear), and have had to make their way in the world as best they can while they wait for spares to be delivered from the planet Lucas15. Alas, they can't actually converse in any way acceptable in public, so while BT were happy to hire some reasonable engineers on the cheap (even if their driving skills are clearly a bit iffy), they do have to ensure the general public never actually has a chance to speak to them and discover the hideous truth. I suspect further hideous truth involves entirely scheduled disruption to our contracted service, but as long as they don't actually tell us that they don't have to make any recompense. But then I'm a wee bit cynical that way.

While all that was going on I was fighting a desperate, and ultimately unsuccessful, rearguard action trying to save my 'puter from imminent death. I finally gave up the fight when the video display simply ceased to display and yet I could still hear the hard drive, which was the part that was claimed to be breathing its last, still merrily clunking away behind the blank black screen. Ah, technology, gotta hate its guts, haven't you? Still, now I truly know I am Old; instead of doing the happy New Computer Dance like all the cool kids, I have been steeped in misery whilst learning the new quirks and foibles. Friends, such is my advanced state of carpet slipper wearing, I would rather things just bally well worked and continued to so do until the end of time or when I've finished with them, whichever is later. Sigh.

On the plus side, I've now ascertained that the front screen of a late 2009 iMac may be readily removed with the aid of the common sink plunger, so now we know why the Daleks carry them...

Okay, that was October. Next Friday sees the first Friday in November, and thus Fountain Pen Day is upon us, so dust off those nibs and decant that ink in readiness. And the day after that the blog will reach its 10th birthday. Zoicks.
Posted by Alf at 8:40 pm 2 comments: