As The Bard almost said; some are great, some have greatness thrust upon them, and some watch greatness wander off owing to their own ineptitude.

Now I'm quite at home with my own ineptitude. We're old friends and see each other on pretty much a daily basis. But there's one monumentally stupid thing I did that still manages to kick me in the wotsits even nine years later. Viz: I deleted some photographs. Of a project. I still have photographs of the project, mind you, but they're of a size to be dial-up connection-friendly for a forum (which is all I needed them for at the time). Which is no good for publication.

D'you see where I'm going with this?

I've only ever made one project that a magazine editor ever asked would I write up as an article, and it was this one. I've only ever been asked if I can provide a photograph for a book, and it was that project. It's like some sort of curse. Ever since, I've kept the originals of every photograph I've ever taken - but no-one wants those. Just this one accursed project.

Yes, The Music Stand of Myth and Legend. When I started calling it that, I never expected to haunt me quite so much...

Which is a long way round to say that Popular Woodworking's current plugging of the new edition of Thomas Moser's "How to Build Shaker Furniture", from which this project came, is paining me somewhat. Because it turned out that I wasn't the only to build this project and not have a colour picture worthy of publication. Nope. Mr Moser didn't either. Did I have one to include in the new edition?

Could I get one?

Well no, actually. Owing to Nephew Numero Uno being in London, while the most cursed project in the world is still in Devon.

Aaaargh! Just for a brief moment I trembled on the brink of publication. In a book on Shaker furniture, by one of THE Shaker furniture guys. *wail* *sob* (and so forth) But 'twas not to be. Hey, I'm not bitter. Bitterly disappointed maybe, yeah, but not bitter. Being asked at all pretty much made my week at the time.

So side-stepping greatness as ever (I'll put it down to modesty if ever you should bring this up again), I would like to say that, even based on the original edition, there are some very nice projects in this book and if you're into the Shaker style at all, then well worth a look. Alas, no affiliation...
Posted by Alf at 4:37 pm 4 comments:

Is it not one of life's little ironies that as soon as the subject of making your own canvas tool rolls comes around, the members of the Old Tools List (dedicated solely to the discussion of hand tools) all chime in with advice on one particular theme.

Viz: What you need is such-and-such a sewing machine.

July |joŏˈlī|
noun1. the seventh month of the year, in the northern hemisphere usually considered the second month of summer2. the month in which Blogging Does Not Happen
Mind you, August isn't looking too hot, blog-wise either, is it, reader? Sorry about dat. But hey, you know me, if I was actually in the workshop I wouldn't be able to resist telling you all about it, so rest assured you're not missing anything.

But I have not been idle, although twiddling my thumbs has been a feature. For some reason, after a lifetime of indulging in the dreadful habit, I randomly stopped biting my nails a month or so ago. As a result, I now have these potentially lethal sharp edges appearing that, I can tell you, feel really weird when you haven't had them before. 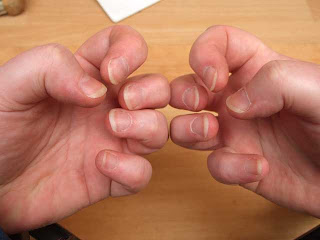 (Yes, I did feel compelled to go "Grrrr" when I posed for this, why do you ask?)

So now I'm faced with alien questions like "What grit is an emery board anyway?" "When is David Charlesworth's seminal work on the care of fingernails in the w'shop coming out?" And most importantly of all, "What bevel angle should I sharpen them to? And will the ruler trick be necessary...?"