Had some interesting pre-owned finds in the last few weeks, the most gloatable of which (to my mind) is this solid brass rocker blotter. 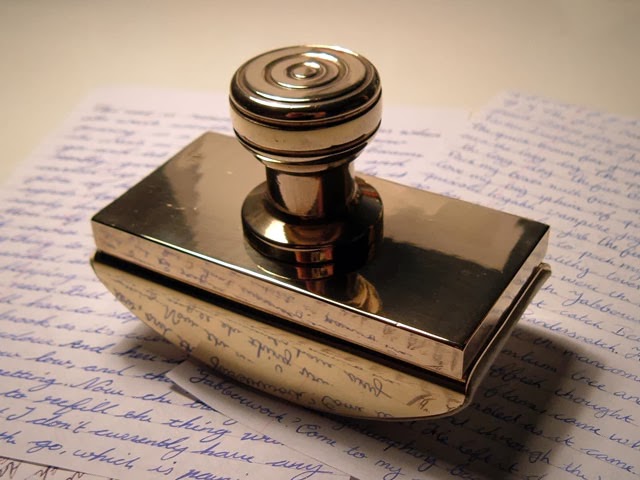 Hey, that's totally a tool, isn't it? Plus probably also an offensive weapon, owing to its 1lb 11oz weight.

You know me, though. A new old tool through the door, and I'm hitting the interwebs to find out more about it before you can say "History Nerd". Which I duly did. No maker's marks to go on, but despite the more ornate (and frankly, rather nicer) knob and lighter weight, it seemed to me to bear all the hallmarks of these. In particular, the standard size model. 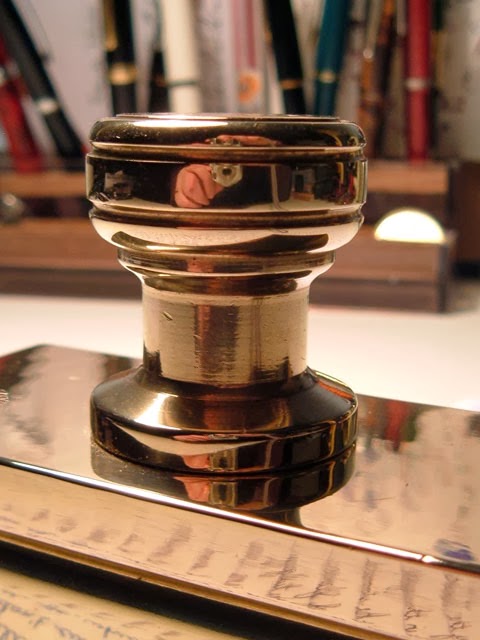 So I cheekily sent off some pics and asked Desk Accessories if it was, indeed, one of theirs. Impressively, I got a reply back in mere hours, and yep, an earlier incarnation of same. Nice. A lot more recent that I had expected when I bought it, but that's not a matter of any concern to us users anyway. 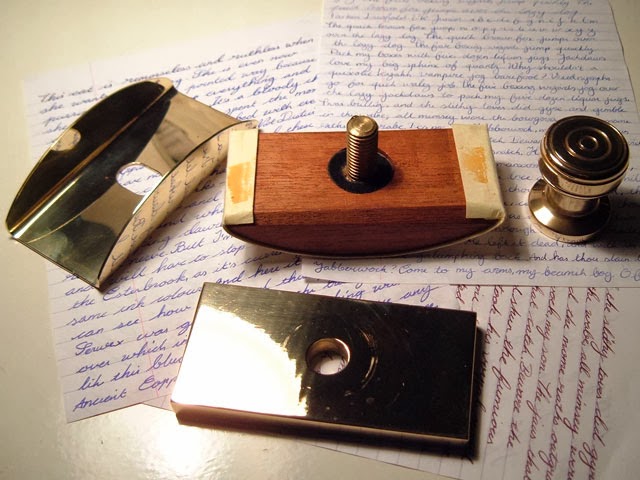 Thus I'm now blotting in high style, with added muscle building courtesy of the sheer weight of brass. Plus it does double duty as a desk toy - reaching out to give it a little nudge to set it rocking every so often is strangely satisfactory.

All rather a relief, as it happens, as I can now quietly retire the wooden knocked-together-in-twenty-minutes "proof of concept" version I had been using. The best that can be said about it is it's a good example of why you want sharp blades in your bandsaw...
Posted by Alf at 6:44 pm 2 comments:

Email ThisBlogThis!Share to TwitterShare to FacebookShare to Pinterest
Labels: not woodworking, tool kit

No Monday Stinks, 'cos currently I have every single bottled ink I own (bar one) inked up in a pen and it'd be ridiculous. Well, yes, granted it's already ridiculous, but writing them all up would be even more so. Mind you, doing that hammers home two fundamental truths in quick succession.

Yep, this blog is all about stating the obvious today...
Posted by Alf at 3:35 pm 2 comments:

The practice of matching ink to pen colour is, I'm thankful to say, widespread. I'm thankful because I seem to be a slave to it, and misery loves company... As far as I'm aware there is no scientific term for it, and my classical education is not so much lacking as fossilised in the ruins of Herculaneum, but you might come over with an affectation and perhaps call it something like chromascriptophilia. Except we won't; we'll not call it the name to suggest affliction, but rather one to conjure up science - chromascriptology - because science causes fewer people to feel uncomfortable. At least when they're talking about it; actual science causes no end of discomfort and scientists may be some of the most dangerous people not yet locked up...

Anyway, let the following be a lesson to the budding chromascriptologist; there's danger in them thar' ink bottles. Viz:

The last ink, I should warn you, is represented two ways upon the face of the interweb. In one case it is a mild-mannered, almost retiring pale pink. In others it's a more vibrant colour with subtle tones of red and orange. A pink, in short, you would not be entirely ashamed to be seen with. I took a punt and hoped the truth of the ink was in the latter representations. O, fateful day.

Worse, this ink is so damn pink as to make even me, the least "girly" person you can imagine, lapse into drawing small hearts over lower case Is and Js in lieu of sensible dots. I can't help myself; it just happens. It's appalling. I fear lengthy exposure to this fiendish pigment can only result in long term speculation on the nature of rainbows, unicorns and whether the stars are, in point of fact, God's daisy chain.

Lessons to be learnt? Oh, so many. But the main one is probably not to take up chromascriptology...
Posted by Alf at 6:45 pm 4 comments:

Are you a woodworker who enjoys exotic - and frankly, not that exotic - woods?

Have you more disposable income that you know what to do with?

Kids! I have the perfect thing, and only seven earth pounds a pencil! 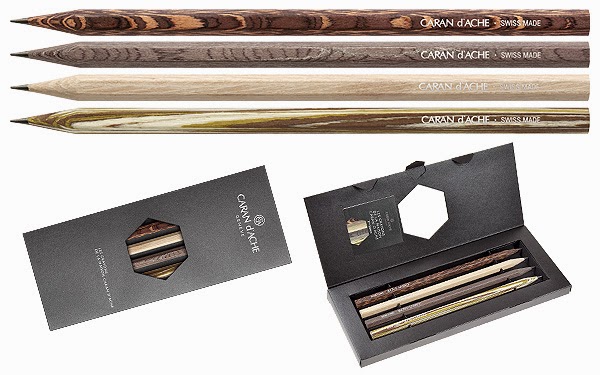 Heck, they don't even include a pencil sharpener...

Very lovely, I'm sure, but for Swiss-based indulgence, methinks personally I might stick to the chocolate. Although that top one does look very chocolate-y, doesn't it? Now chocolate pencils, that I could get on board with...
Posted by Alf at 7:32 pm No comments: 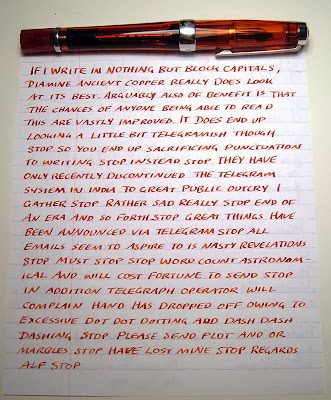 Some people waste their time playing "Candy Crush". Not I. I have even more pointless things to waste it on...
Posted by Alf at 9:30 am 1 comment:

This exercise is telling me two things: firstly I should have stuck more with the Old Classics amongst inks. The Waterman and Pelikan are being over-used because they're so reliable. Waterman for everything because it's so good natured to even the most sensitive little blossom; Pelikan to tame the too-wet nibs. Getting a bit bored with the Pelikan blue-black in particular though. Functional, but not thrilling.

Secondly, no-one's interested in cheap pens, so we've gone up a couple of rungs this week. Although in the Grand Scheme I acknowledge that some would still call these cheap and probably dismiss them. Their loss, I assure you. 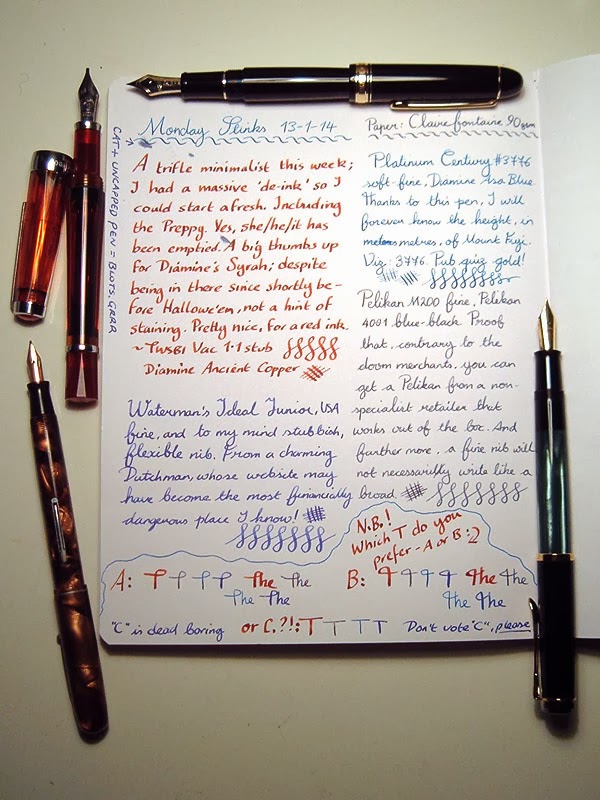 Such is my delight in "Junior" that I forgot to note the ink. Hah. Guess who? Yep, Waterman Serenity (formerly Florida) Blue. It's a good colour, mind you. However, doesn't that celluloid of gorgeousness rather say a brown to you? Cue the glamour shot: 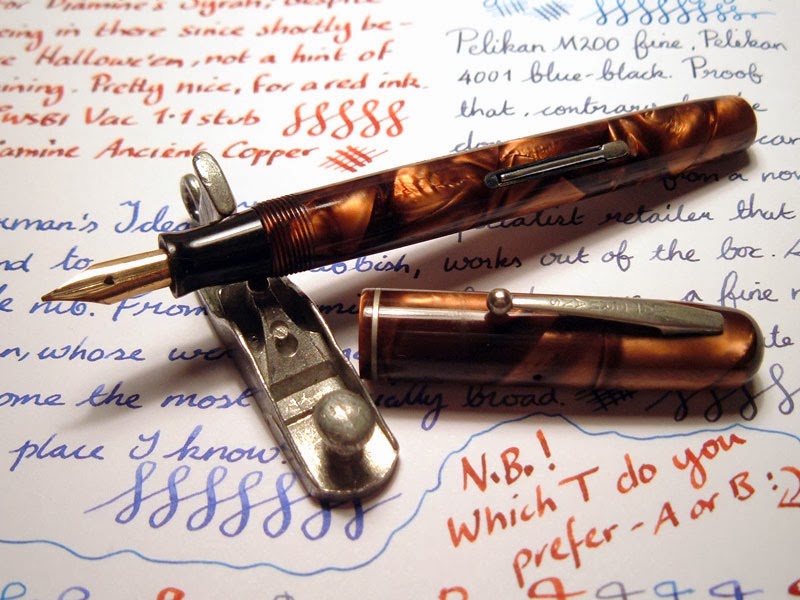 The reported occurrences of Orange Crustiness that can sometimes appear with Ancient Copper means I've resolved to confine it to pens of modern manufacture, so that's not an option. Pensioner Pen-friendliness and good shading makes a bottle of Waterman's Havana Brown ink highly likely to darken the doors of Alf Towers in the not-too-distant future, I fancy. Or whatever they call it now. Seriously, what did Waterman hope to achieve by changing the names of their inks? Apart from confusion. Tsk.
Posted by Alf at 9:30 am No comments:

A Salad of Many Herbs So, you may recall I was nearing the end of my journal hodgepodge book or "Zibaldone" (That's the Italian term I couldn't remember) and was suffering my usual chronic indecision over a replacement. Well, I put it off as long as possible, but even so I managed to finish the old one on the 2nd. Luckily I'd finally decided what to replace it with and was only waiting for a handy discount to come into operation on the 1st before ordering, thus it arrived on the 4th and it all generally dovetailed together pretty well. Which shows the gods do occasionally smile on us indecisive fools.

In the end I went with a Rhodia A5 Webnotebook with a dot grid. Finally realised that I'd miss the hardback format if I didn't have it, and dots seemed the most crazy-person-friendly type to pick. Viz: I'm dotty and so is it... It's about two-thirds the thickness of my old Asda "Executive" (when the latter isn't stuffed full), which is a Bad Thing in having fewer pages for the given lettuce, but a Good Thing in reducing the hand-falling-off-the-page-at-the-bottom annoyance. Oh, and the marker ribbon length is pathetic. Can you see that whisp of black at the spine? That's it. Useless. 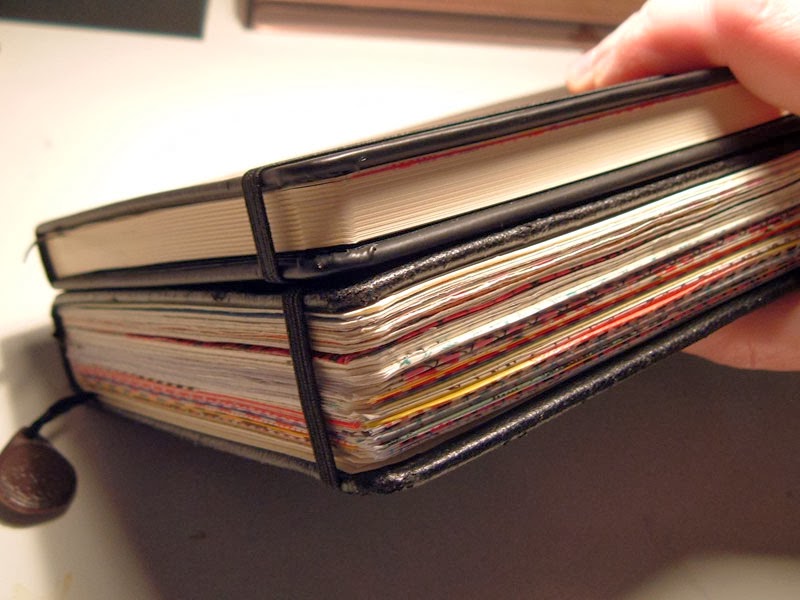 Not wild about the ivory-coloured paper, to be honest, but it's taking everything I've thrown at it thus far, including a flex nib that was gushing ink like... well, like 99% of the rivers in the UK at the moment. i.e. Lots of flow. No hideous bleeding, no feathering. We'll see if I can grow to love the paper colour over time. Either that or that Leuchtturm will get themselves sorted and stop making the quality of their paper such a lottery. 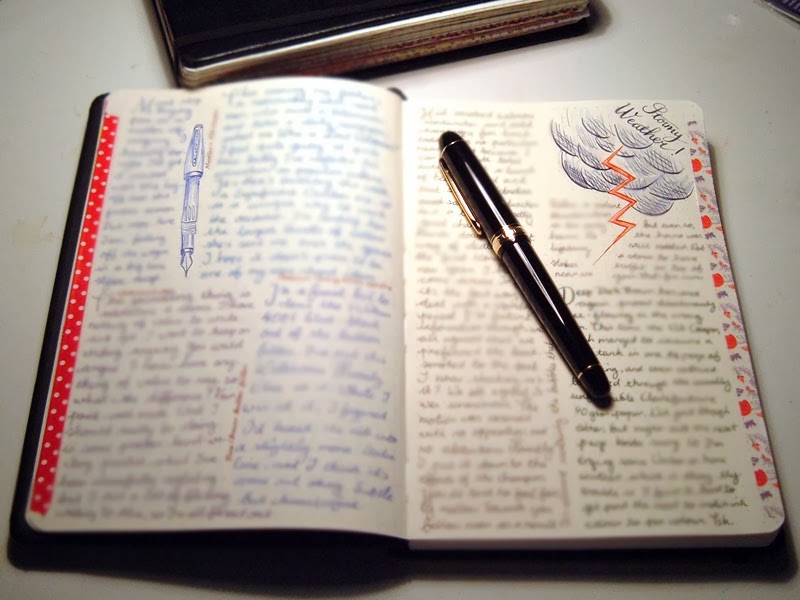 Right, that's it. I'm going while I can still resolutely ignore the fact that I may be developing a thing for orange pens. No, really, I think it may be becoming a problem. A combination plane kinda problem. Eeep.
Posted by Alf at 6:16 pm No comments:

Hope everyone is still in one piece after all the atrocious weather we've been enjoying on both sides of the 'lantic. Unfortunately the grey weather is playing havoc with my reliance on natural lighting, so this is dismal photography indeed. The Pilot blue is an excellent, rich and vivid blue, trust me. Just not in this case... 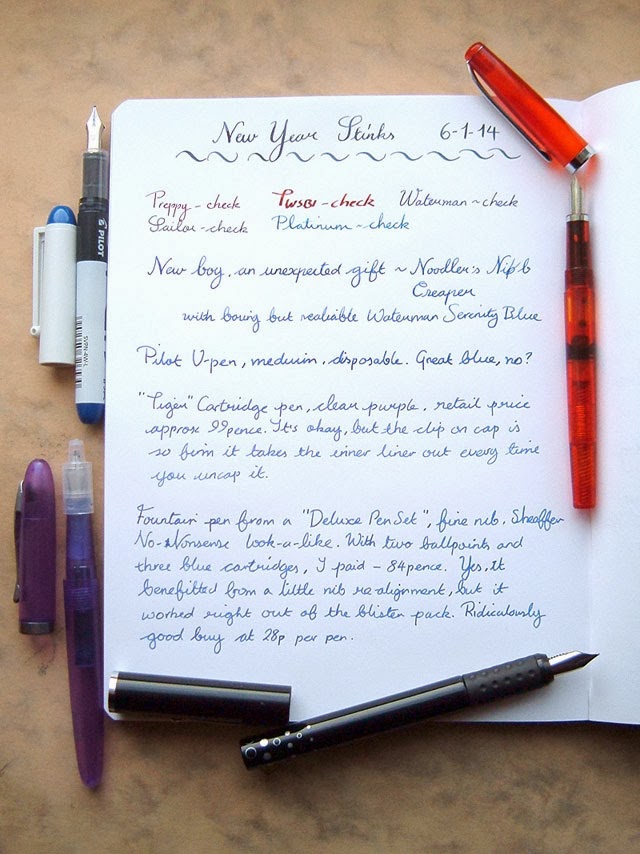 Anyway, the new year is often a time of belt tightening, and as such we have a bit of a budget theme going here. Generally the Noodler's Nib Creaper would be the cheap option in many fountain pen gatherings, but here it's by far the priciest at something over a tenner. It's way smaller than I realised; not dissimilar to the GB Parker Victory and Junior, but slimmer. I'm much taken by it, and the nib is the best yet of the Noodler's I've tried. Which reminds me, I used the Noodler's Ahab and Pelikan blue-black for the title - I've tweaked its flex even more, and now it's pretty nearly exactly how I wanted it, so huzzah.

I think the Pilot disposable may be clearance stock because they've changed its appearance, and thus it was much cheaper than usual, and thus I bought one to try because people rave about them. In all honesty I find the idea of a disposable fountain pen an anathema, even if you can (by somewhat laborious means) refill it. I will happily say it's the blobbiest line and thus worst Pilot nib I've ever used, which is comforting as I'd started to think Pilot were infallible.

The purple "demonstrator" was the result of a pen failure via Amazon - got sent the wrong pen, and after a small delay while the seller suggested I defraud the Post Office in order to return it, which I declined, they eventually said "keep it" rather than pay for the return postage. Which, given how much I see you can pay for one (pour example, ici) versus what they wanted to charge for it, I can fully understand. And it's... okay. It wouldn't be a total disaster if you were saddled with one of these for school, but the slip on cap problem, if ubiquitous, would get old very quickly.

The clear bargain for me is the Sheaffer-a-like from the "Deluxe Pen Set". Yes, it's fairly cheap plastic and probably breaks several health and safety rules by having indentations in the cap instead of actual breather holes, but the clip is sturdy, the grip is comfortably rubbery, and the nib is good. Pens costing fifty times as much and more regularly come with the nib tines out of alignment, so I refuse to damn it for that. It wrote, and that's the important thing. Add in a couple of not bad ballpoints for the money, and it's a total steal. Of course, another example might be utterly useless and a complete waste of money, but thems the breaks at the bottom of the barrel.

So there ya go; my ready response if anyone says fountain pens are too expensive. What my excuse is for my fascination with these budget pens though, I have no idea.
Posted by Alf at 2:51 pm No comments: