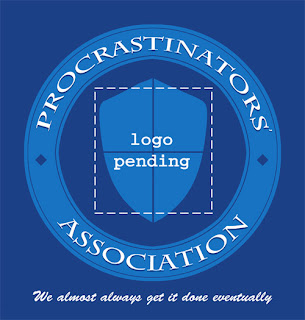 No, no, it's not an odd symptom of Tourettes causing me to type random words. That's the other name given for a bradawl that I posed the question about last week; a sprig bit. Makes sense, a sprig being a headless brad-like thing. I like it. If I can remember to be sufficiently archaic (not usually difficult) I shall use it more often.

Meanwhile I managed to snatch some w'shop time. No! I hear you cry in disbelief. Yes! I reply, also in some disbelief. Behold!

Waddayoumean, "What is it?" Clearly it's a prototype lolly stick dispenser, allowing Bertie to choose his preferred colour scheme for destruction: 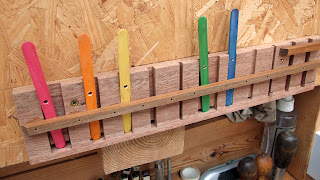 No? Not buying it? Thought not. I know what gave it away; Bertie would inevitably destroy the dispenser first.

Anyway... I've been mulling over the question of tool storage for some time now. Okay, yes, some years. Genius cannot be rushed.

In this case, neither can indecision.

And what with one thing and another, chisels are on my mind. Also a little project I want to do that'll require some housings (or dados if you're 'Murrican or accustomed to more Normite thinking) that suggested that some practice of same would be no bad thing. Put the two together, and wadda you got?

Well first you've got the unhappy discovery that your hitherto unimpeachable canvas tool rolls have somehow got damp while in hitherto unimpeachable drawers and thus your chisels are, in places and to varying degrees, impeached. Not to say orange. Even unto being crusty on one of them. The new ones, naturally, because new tool steel is like one whacking great big rust magnet.

Seriously, I've spent more time removing rust off those Ashley Iles chisels than I have using them. No joke.

So dashing the tears of unhappiness from the chisel-fantic cheek, I removed the rust, threw the tool rolls to the far distant corners of the w'shop in disgust, and generally thought that some experimentation in chisel storage was clearly overdue.

Now I've done the holes-inna-shelf system until I'm blue in the face, but I have to say I'm not sure about it. Either I've ended up with only being able to see the handles, which is not always helpful if you have half a dozen chisels with identical handles (obviously not the case here). or else with the cutty-pointy bits waving about ready to bite the unwary hand (very much the case here). 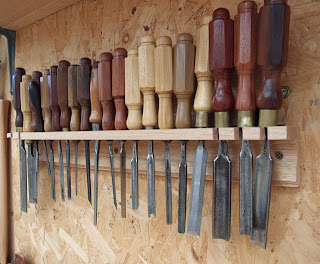 So I reckoned I was overdue the hold'em-by-the-blade option. And eleven housings later, I was pretty good at them, I can tell you. 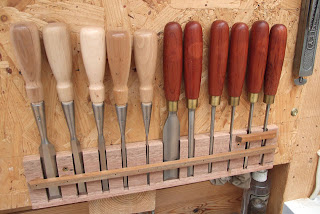 Not convinced I've cracked the design, but it's a valuable exploration of the option, and meantime it'll keep the chisels safe, handy, and visible so I can (hopefully) spot any rust (hopefully not) before it gets a hold.

Awl that and more

So there's been some discussion on The Porch concerning bradawls. Well actually it was about gimlets originally, then bradawls cropped up, then someone said a bradawl and a birdcage awl were one and the same, and then I opened my big mouth to ask if that was actually so ('cos I thought not) and why would I need both. Then the next thing I know...

Well first let's talk about birdcage awls, which I like, and use. They have square shanks coming to a point, and they kinda ream out the hole and are generally just brilliant. I have a nagging feeling that it was John Brown who brought my attention to the birdcage awl, enthusing about it compared to a bradawl. So that's what I went for, by-passing the screwdriver-like bladed bradawl completely. In hindsight, this is a bit like skipping owning a battered old Mini and going straight to the new Jaguar; frankly I recommend it.

My birdcage awl is the Crown tear-drop handled jobbie on the far left. I'd like to extoll the virtues of this Sheffield-made tool in an unusual burst of patriotic tool worship, but, well... the blade isn't in straight (or central) and the ferrule's split. So... But the handle's lovely and comfy, so I forgive it quite a bit.

Next to the birdcage awl are the two bradawls (only two!) I seem to own. That's after I tidied the blades up on Friday, because hitherto they'd been sitting in the To Do pile being continually ignored. Well look at 'em. Are you stirred? Even a little bit? I'm not. I suppose some radical cleaning work on the handles might help. 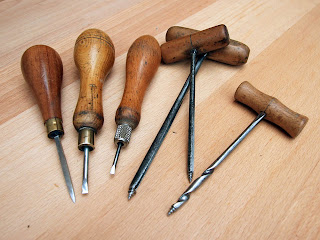 On the far right is the twist gimlet, the other two being shell gimlets. Honestly, I think I like the shell ones more but the twisty ones are generally regarded as preferable as far as I can tell. But I really don't use any of them; I like my wheel braces too much. And push drills. I love push drills. Have I mentioned that before? I think perhaps I have. The world needs more push drills; it does not need wrist-busting gimlets.

Anyway, I'm not sure anyone really ever explained why you'd need both types of awl, but there was a general vibe of "They're dead easy to make, so what are you waiting for?" Thus I found myself at the lathe, cursing the sticky tailstock which no amount of dismantling, reassembling, greasing, oiling or swearing at will remedy. But I digress. Discovered a turning blank I'd tentatively labeled "Padauk?" was actually She Oak, and that a very long, very thin, very bent screwdriver from the pile of stuff that was supposed to go to the dump approximately a twelvemonth ago and has mysteriously turned into a source for endless useful bits instead was just the ticket to provide blade fodder. Et voilà: 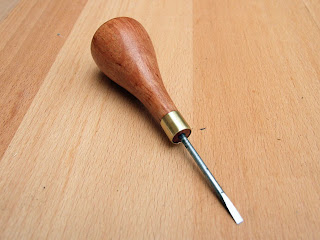 Being me, and an idiot, I only looked up about awls after the event - turning to volume one of The Practical Woodworker, wherein Mr Jones' information leads me to confirm my suspicion that the bevel is on the long side. He sez 1/4", should you be eager to know. Apart from that, I'm fairly pleased. And it's very comfortable to hold, to such an extent that I had some trouble getting various members of my family to put it down. Awls awl round for Christmas, then...?

Question Box:
Q. Can I use any types of wood for draw boring, or is oak essential? (P.S. Find the blog occasionally satisfactory, but could you stop deleting all the Russian spam? How else am I to find new sources for my vodka habit?) Mrs Ivy Trellis, Pant-y-grdle, North Wales
A. Well, Ivy, it really depends on the situation. I'd say, quite firmly, that in the case of a parrot perch - for example - oak is absolutely essential. If you can't get ironwood. Or maybe jump straight to solid steel... 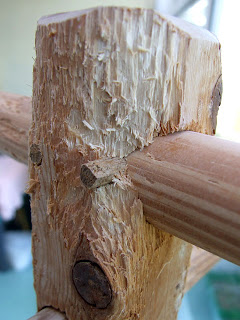 Bless him, Bertie's doing his best, but it's a lot easier to chew the softwood round the peg, than the sturdy peg itself. The question was once famously posed "Do Androids Dream of Electric Sheep?" I couldn't say - future generations will have to answer that one. However, I suspect this could be the sort of thing wood has nightmares about: 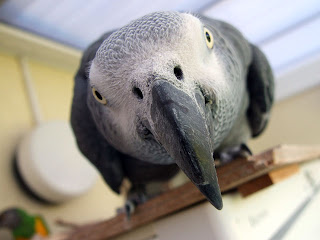 Be afraid. Be very afraid. Bertie is right behind Roy Underhill in believing trees are evil and must be punished. One bite at a time...
Posted by Alf at 5:41 pm 1 comment: