Missed me? No, didn't think so. But not letting you get away with it for the entirety of August. So there.

Mostly absent owing to continuing plague of not being in the w'shop because to tendency of grass to grow, domestic goddessing to bestow on the worshippers, and so forth. Also wasn't on-line much either, owing to a connection speed of 0.13Mbps for several weeks. Yes, the nought point isn't an error. Slooooooow.

Instead did real life things, such as a deep mining operation amongst my belongings that resulted in several black bags of rubbish and several discoveries. Amongst the throwaways were - finally - my video cassette collection, which resulted in freeing up a bookcase my dad built back in, ooo, the 1960s I think. Five foot long, dowel construction, I believe, possibly in sapele? Not sure. Then a 1/4" ply back screwed on and four adjustable shelves. He made two, and they've moved house many, many times and stayed rock solid. But not heavy - I can easily move it single-handed. Not glamorous, but oh so useful. Not a glamorous shot of it either, but gives you the idea. 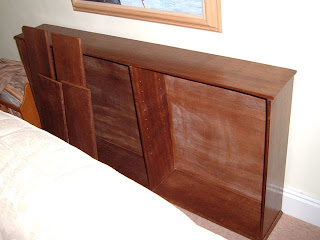 Anyway, while it was empty I took the opportunity to give it a bit of a polish, and finally replace the poorly-fitting 6mm replacement dowels we used after the last move. (Naturally the pegs got lost, didn't they?) Out with the dowel plate to run up some correctly sized 1/4" ones instead - didn't have that last time the shelves were empty. So yep, I got some workshop time. Of a sort. Don't knock it; it wasn't glamorous either, but will be useful. 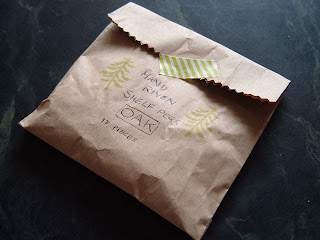 Once we actually get them out of the joke craft-fair-a-like "packaging" I put them in for a giggle (we'd just been to one, and spent the time goggling at what people think worth making and how they sell it). Because, of course, faced with the unheard of situation of shelf space now we don't know what books to put in it...
Posted by Alf at 1:14 pm 2 comments: