Now I don't want to shock you or anything, but just for fun, some tool-related musing. Two things caught my eye that amused me, and there's a remote chance they might amuse someone else.

First up, I thought Amazon surprisingly frank in their product description when they describe this Am-Tech duo as a "double blister". 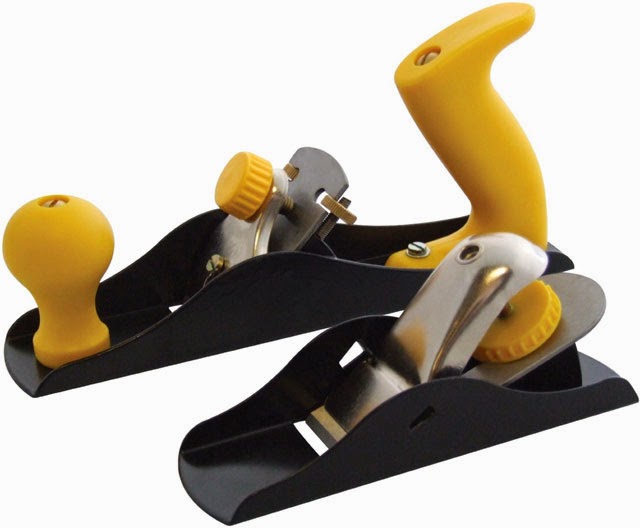 Then, as we head towards kick-off, this Official England Toolkit caught my eye. The very thing for hasty rebuilding of defences at half time, one presumes. 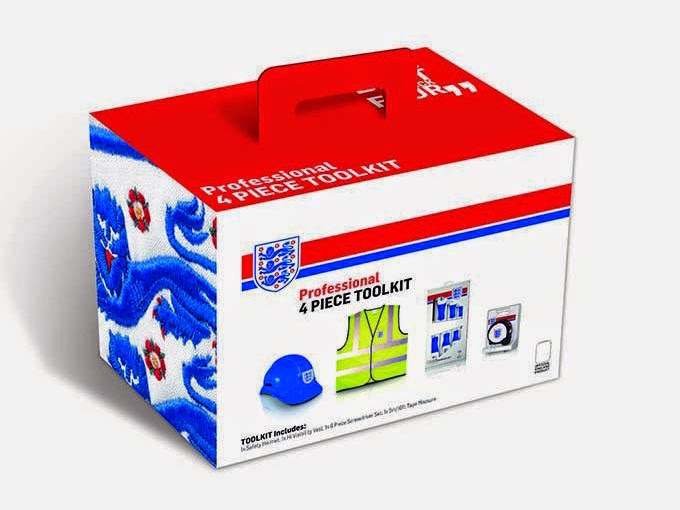 Of course being a football kit, they'll probably have another one of a slightly different design for sale in a month's time...
Posted by Alf at 7:29 pm 2 comments:

Email ThisBlogThis!Share to TwitterShare to FacebookShare to Pinterest
Labels: my eyes my beautiful eyes, tool kit

Tool purists may want to look away now. Pen purists ditto. So-called "upcyclers" might like it though. Yes, it starts out pen-related, but woodworking happens. Just a little bit.

A few months ago I fell across a Parker GB "Slimfold" sans cap, but with a rather nice gold nib. I figured I might be unbelievably lucky and find a cap, or at least find another home for the nib, so divvied up the necessary lettuce and took on custodianship. Well it turns out the nib on a Slimfold is insanely small. I mean really, it's minute. Does the job in its intended body, but finding another donor body for it? Not outside another Slimfold. Another learning experience.

Of course there was nothing actually wrong with its existing body; to all intents and purposes it's a working pen, just without a hat. So then I started to think laterally and wonder about desk sets. You know the things; usually a pen-holding trumpet (or two), usually empty, sometimes with an ink well, sometimes with a calendar, clock, or some kitsch ornament of something or other. They're everywhere and no-one wants them.

At least they're everywhere right up until you consistently take a cap-less Slimfold in your pocket on the off-chance you'll find a suitable set and can see if the pen will fit nicely in it. The things all vanished from sight overnight. It was uncanny.

Time passed. Tired of the gods trifling with me (again), I finally decided to at least find out if my lateral thinking wasn't off the wall so much as up the wall, and threw one of those pen holders marketed to the turning fraternity into an order for something else. It turned (!) up and, well, let's say it's very shiny. At the moment. Not sure how long the coating will last, but hardly surprising at the price. However, it fit the Slimfold like a flaming glove. If I didn't know better - and the cap threads didn't totally give it away, not to mention it being rather short for a desk pen - I'd swear it was made for it. Excellent.

Buoyed by this progress, I got out the atlas and looked up directions to the workshop. A few false turns later and after evicting the new civilisation that had evolved under the Maxi26, I was staring at my stash of exotic off-cuts for inspiration. Rosewood? Something turned? Something incorporating that old boxwood rule? I'll just move this battered old mortise gauge head aside and... Oh, that's heavy.

So one split rosewood (An outside chance it might be ebony, but unlikely I fancy) mortise gauge head with an inevitably chewed-up clamp screw, but the brass escutcheon and wear strips in place and good order. Appears to have been used to hammer in small pins at one time and several areas where wood has split off. Not wildly promising, now I came to look at it, but I cleaned it up anyway and gave it the knackered wood equivalent of a swipe of lippy and some blusher. Shiny. Let's call it "Vintage" - that covers a multitude of sins.

Okay, so a gauge head has, by its nature, a large hole in the middle of it. I decided this was where the pen holder would go, screwed to another piece of wood that I could cunningly hold in place with the clamp screw. That way no permanent damage caused, should the world run so utterly short of old mortise gauge heads that this one ever became desirable again... A dive into the Even-Smaller-Exotic-Off-Cuts yielded a suitable piece of Muhuhu, and a file made reasonably short and accurate work of shaping up a suitable plug. And yes, a file; don't start on me. It's not only small, but a cross-grained evilly-minded piece of wood, and a file was the best tool for the job. Apart from having to grind a brass M4 machine screw down to the required length, the rest was a boring as drilling a hole might be expected to be. A trio of non-slip little rubber feet completed the thing, and behold! The old tool and fountain pen lunatic's ideal desk pen? 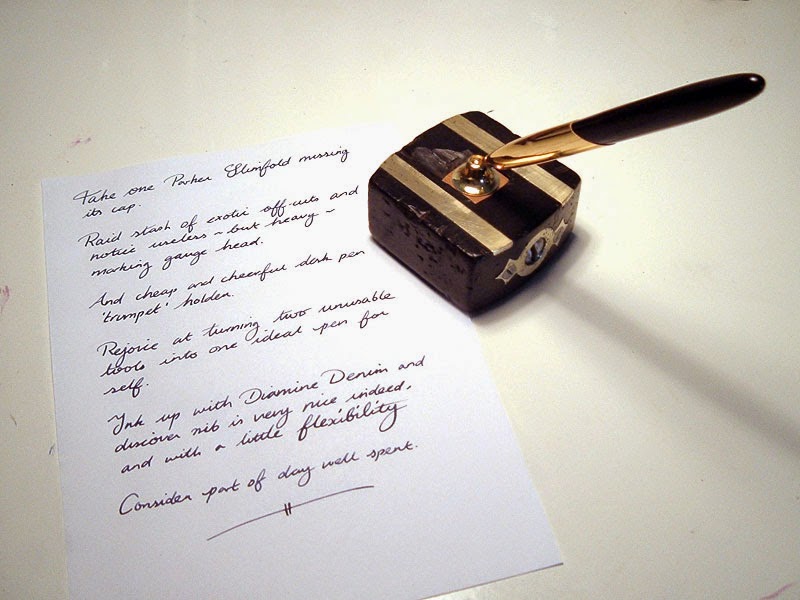 Once the freshly cleaned brass has dimmed down a little again, it'll knit together better. Anyway, you see what I meant by battered; that poor gauge suffered horribly. 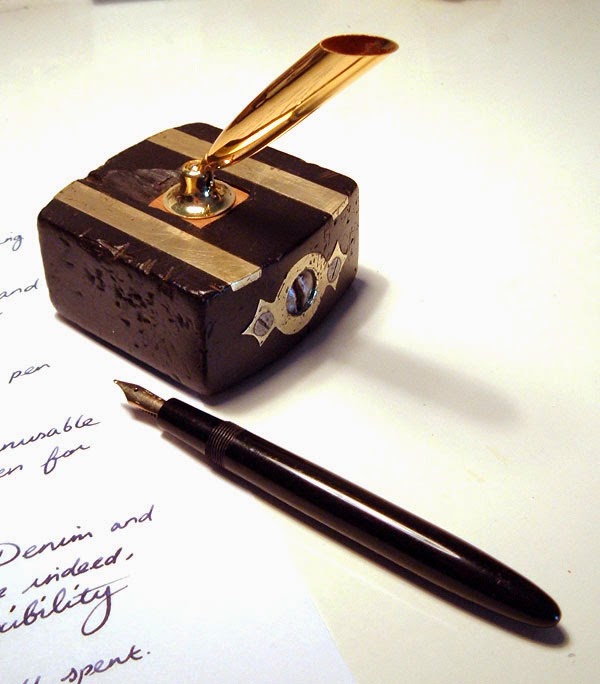 Anyway, there ya go. Not to everyone's taste, I know, but I like it. Very tactile, and I'm pretty sure, unique. Now we just wait to see if the pen is up to the task; I imagine leaking and/or drying out are both possibilities, but as both the pen and myself are novices at a desk pen existence, I really have no idea. Oh goody, another learning opportunity...
Posted by Alf at 4:29 pm 13 comments:

Well, no, this is actually more of a woodworking post. Although... okay, so I may have been looking at pencils with more than passing interest. Just looking.

So, if everyone would please turn to page 62 of their copy of “De Rerum Fossilium Lapidum et Gemmarum Maxime, Figuris et Similitudinibus Liber” and look at figure 7.5. What d'you mean you haven't got your textbook with you, Crapforth? Share with Binns Minor then.

Not having a copy either, I don't know exactly where it may be found among the pages, but in 1565 (or maybe 1567), a Swiss gent called Conrad Gessner (or Gesner) had his book published, and apparently as all students of pencil history know, gave us the first description of a pencil:

"The stylus shown below is made for writing, from a sort of lead, which I have heard some call English antimony, shaved to a point and inserted in a wooden handle." 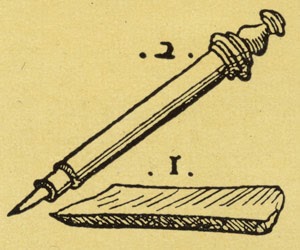 Thus more of a lead holder than what we might think of as a pencil, but let us not quibble. Not much to go on regarding construction from Conrad, but some bright German sparks have come up with a modern take on the thing; the Cleo Skribent Der Gessner Pencil:

Okay, so at this point I got interested. All wood, including the "clutch" mechanism. I went on a search for more images:

Some other useful angles here and here. And with some Photoshoppery magic, created this:

Initial measurements (and some of the pics) came from the fascinating Dave's Mechanical Pencils Blog, and from there I worked out what I think are some of the other key dimensions (could be a mm here and there - they're a handmade thing anyway) and gathered all the salient facts together.

Thoughts on the best choice of species for the clutch holder are encouraged. I wondered about beech; it looks beech-like here. But I presume it has to be able to give slightly, and perhaps beech is too hard.

Anyway, there ya go - someone go forth and make one. Lead of the right size is readily available online, and a handmade workshop pencil might be something different for folks seeking ideas for Secret Santa. There are only so many marking knives, gauges, and screwdriver handles you can gift before you've saturated the market. Then come back here and tell us about it.

Before you ask, yes, I'd have taken a crack at it already if my tailstock didn't need the strength of ten to wind it in and out - I've disassembled it, I've squinted at it, I've greased it, and I still have no idea what its problem is. Heck, if squinting at it doesn't work, I'm all out of ideas.

Of course all of the above presupposes that there hasn't already been one or more in depth articles on the making of same already, all of which have eluded me entirely. In which case, apologies; I'm so out of touch I could be a High Court Judge...
Posted by Alf at 11:11 am No comments: