This is just a guess, and I may be wrong, but have you been neglecting your interest in 19thC rural poverty and the birth of the trade union movement? You have, haven't you? You may well hang your head in shame. I, however, have not. Well I have sort of, 'cos this particular film is long and largely miserable and my attention wanders, but some of the pretty pictures caught the attention of my butterfly mind. Amongst them, the carpenter's workshop. And being as how I'm nice like that, and also owing to a complete lack of my own endeavours to blog about, I thought I'd share: 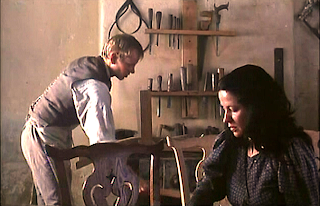 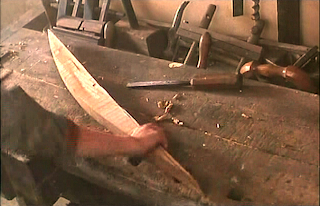 Not sure, but is that a bookbinder's press in the tool well there? Interesting hammer head too. 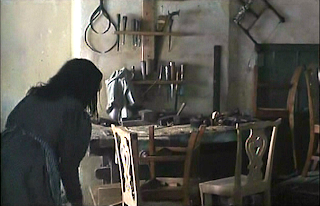 The bow saw appears to be tensioned with thick rope, which is slightly bizarre.
Anyway, have fun picking it over. I did.
Posted by Alf at 10:14 am 2 comments:

I dunno; you wait years and then two come along at once. And I know what you're thinking; blog entries. Hah! You should be so lucky...
Amongst the very earliest pages I visited in my interweb life was Blood & Gore, Patrick Leach's amazing, biased but entertaining resource of information on Stanley planes. Virtually the whole of my interweb existence subsequently has been spent wishing there was something remotely similar for the pride (once upon a time) of Sheffield; C & J Hampton. Better known to all of us as Record Tools. Well now there is. Are. Two of them. Neither, it appears, Made in England - which is all too ironically apt.
David Lynch (Esq), now domiciled Down Under, brings us Record Hand Planes, A History at www.recordhandplanes.com. Not only does he have an extensive collection of his own, but has also got permission to use Leslie Harrison's introduction from the No.15 catalogue reprint. Includes a detailed, illustrated guide to identifying the age of of Record planes that's worth the price of admission alone.
www.record-planes.com is rather less obviously owned by anyone, but I think possibly draws upon Mr Harrison's introduction as well. Perhaps closer to Blood & Gore in terms of detail of individual models. Also includes a guide to value, in dollars. US, I assume, but it doesn't actually say.
Both worth having in your bookmarks; both to be congratulated on taking on such an enormous task. And that's me with one less "to do" on my list ;)
And before I go, if you've been waiting for any words on the Veritas beader, can I point you in the direction of Paul Chapman's review. Incidentally, his closing point about the fence is one I've complained about myself. I'm also not wildly enthusiastic about moving the blade rather than the fence; there's really no straightforward way to ensure the blade is where you want it to be and will stay there while you tighten up the clamp. Assume my usual moan about the handles; I really haven't warmed to the configuration at all. To be honest I was monumentally underwhelmed by the whole thing. I like scratchstocks and beaders, I really do, but I would say it's overkill for the majority of us; personally I found it easier to use a homemade scratchstock on straight stock. However, if you're expecting to bead internal curves, it might well make life easier. I don't, and as such its joys totally passed me by. I expect they'll sell them by the bucket load ;)
Posted by Alf at 8:17 am 6 comments: