Now as it happens the recipient of my gift doesn't seem to have put two and two together, so really I should probably continue to remain secret. But what the hell. Besides I want to add it to the previous kit experiences on the website at some point.
Anyway, one Veritas Small Spokeshave Kit, rendered (not necessarily as well as I'd have liked) in dalbergia latifolia, aka Sonokeling Rosewood. Finished with oil and wax. 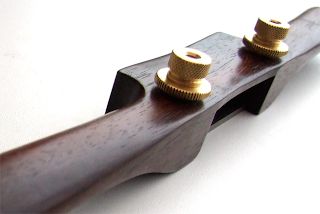 And let me tell you, the smaller size makes it that much more finicky a task. It doesn't seem much of a difference on paper, but it just ups the ante enough to make life a tad testing. Does make for a handy small shave mind you, but I wouldn't recommend it for your first try. For some reason none of the UK stockists seem to carry it anyway, which is a shame. But maybe just as well as I won't be tempted to do it again...
Although rosewood will probably not be my first choice - I seem to have developed some sensitivity to it, which is a major pain in the arse. Still it solves one "Shall I?" that's been fluttering about my brain for a few years now - I never will get round to swapping all the bubinga on the Veritas planes to rosewood.
So that's that for another rather sparse year of blogging. Must Do Better. May 2010 bring you more joys than sorrows, may your workshop be warm enough in the winter and cool enough in the summer, your edges sharp, your timber well-behaved, and your joints tight. Happy New Year! :)
Posted by Alf at 10:05 am 4 comments:

Or how it isn't always better to give than to receive... 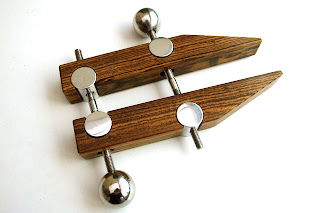 This gorgeous hand screw/Jorgensen-a-like-but-better was under the tree from my UK Workshop forum Secret Santa. Jaws are 6 1/4" long. I've got it next to me here at the 'puter and keep stopping to play with it. Lubbly jubbly. Only downside is this is really starting to tip the number of tools I have which are far too good for the workshop into the danger zone. Either I need a posher w'shop - or a display cabinet... ;)
Posted by Alf at 12:08 pm 2 comments:

Compliments of the Season

Just a brief stop in to wish the reader a Happy Winter-festival-of-their-choice.
Oh, and the mystery item; couple of good guesses, but it's actually to keep track of whether the cats (Lucy and Carrie) are in the house or out in the garden. With all the cold weather, Lucy in particular has been in and out more times that the little people in one of those weather houses. After the umpteenth time calling for her outside only to find her curled up on someone's bed, well action was required.
All we need to do now is train them to push the markers across... ;)
Posted by Alf at 2:33 pm 2 comments:

Yes, I know; been a bit of a hiatus. Again. My apologies. It's not even as if I've not been in the workshop; I have but principally on the aforementioned Secret Santa thingie which remains under wraps. And the other stuff has been largely parrot-related.
New ladder for PJ for instance. A tour de force in its field, I don't doubt, but not exactly great woodwork. Alas I only had softwood dowel about my person for the rungs, so he's already crunching his way through those. Actually there's been a fairly spirited attempt on the beech uprights too... Then there was drilling holes through about 50 blocks of cardboard so that, they too, can be torn to shreds. Oh, and my own DIY version of the Buddy Perch - yours for thirty smackeroonies *gasp*, or in my case, about tuppence ha'penny using old cage bits and pieces and a natty dowel screw/threaded insert combo. And a few hundred quid's worth of tools. (Is it me, or is that a flaw in the money-saving aspect...?) Amazingly it does actually work - eventually, when the suspicion of something new was overcome - and I can now get PJ to where I want him to be without risking losing a finger. Yippee!
The closest I've got to even slightly proper woodwork is this little gizmo - I got to use a #044 and everything. Sigh. But even that was such a rush job it's a long way from beautiful. If I find a moment, it'd be nice to replace the knobs with something turned instead, f'rinstance. Maybe something fancier than those bits of dowel too... But it is functional. The question is what function? I'll leave you to ponder on that one... 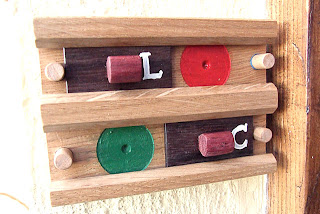