The perennial "Shiny tools don't make the craftsman" argument is bubbling along on one of the fora again. I confess it maketh me to yawn mightily. To my mind, making it a point of pride to use the crappiest-looking tool for the job is just as crazy as buying a fancy one and thinking that's the solution to woodworking genius. Oddly it only seems to be an issue in the wunnerful world of hand tools, which also makes no sense to me. Now if folks got their undergarments in a twist over someone spending £600 on a power tool that will last, what? 20 years, if the gods smile benignly upon you. Well, I could see the point of sucking the collective teeth. A bit. But £250 on a plane that'll last you the rest of your life and probably all of someone else's? Or even lots of someone elses? It's cheap, man. Cheap.
Why yes, I have used that argument in justifying a tool purchase before now. How did you guess?
But anyway, to those folks who want to be smug about using their rusty Stanley Bailey they fished out of a pond in 1973, I say - You flash so-and-so. How about this fully operation piece of tool goodness, then? 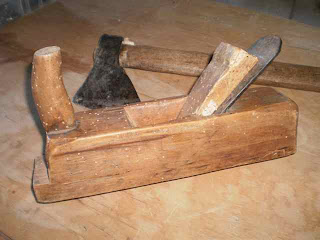 Somewhere among the worm holes is a working tool. See? 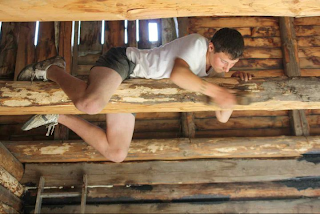 You can hear the intake of breath from the Health and Safety-concious from here... This, my friends, is apparently how you go about removing the bark from your house in the mountains of Romania. Apparently hearing the munching of the little critters eating their way through the walls of your abode in the dead of night is not conducive to a peaceful mind, so the bark has to go.
Posted by Alf at 10:20 am 2 comments:

Not sure how it happened, but I currently have three Eclipse #77 saw sets in my possession. Now I know I've definitely sold two, maybe even three, over the years, but they just keep coming. I feel a bit like Mickey Mouse when faced with the remorseless tide of bucket-carrying brooms. 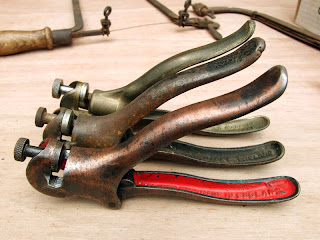 At one point it looked like the Eclipse was going to become Saw Set Flavour of the Month, like the Stanley 42x and the Taintor before it, but alas, no, the Stanley remains the Chosen One. Which is silly from where I'm sitting, 'cos here in Merrie Olde Englande you can throw stones all over the place but not hit a Stanley, whereas you can actually go to pick up a stone and come away with an Eclipse 77 in your hand instead. Hey you can even get the modern Somax version of the Eclipse more easily.
So I thought I'd better try and decide if I wanted to keep my user 77, or change to one of the others - and was struck by the subtle differences between the three. So I thought I'd share, because it can prove handy to know that not all 77s are created equal. 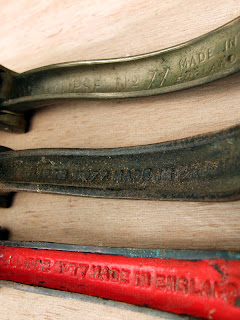 Of course it's the business end that matters - and if you've looked into these sets at all, you'll have discovered that the hammer/plunger/call it what you will can vary in width. Consensus is that it all depends on the age of manufacture, and certainly I can't recall ever seeing anything that suggested that the 77 was marketed with any emphasis on availability of different hammer widths. The anvil varies too - the different style of markings the most obvious indicator.

Honestly, I'm torn on which of the two on the left is the older. My first thought was the red painted one (my current user) on the far left, but then you turn it over and... the U-shaped top is much narrower on the middle one, and my user one looks more like the wider-hammered on on the right. And I'm pretty darn convinced the wider hammer and those extra ribs in the casting are found on later models. So who knows? Well maybe you do, in which case, the comments box is open. I'll provide tea and biscuits. 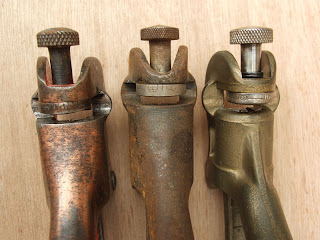 And after all that, what to do? Well while researching a bit for this blog post, I re-remembered that careful, considering saw setters argue that you should (ideally) have a saw set tuned up for each size and set of tooth - or at the least, to cover groups of teeth. Anvils should be ground differently for less set angle, probably a wider hammer is desirable for larger teeth, and all that kind of thing. In fact much discussion on the matter over here, including more on the Eclipse. And yes, most of that goes over my head at about 50,000 ft and honestly, if the saw cuts, I'm inclined to think "Hooray!" and leave it at that, but fwiw.
On the other hand, if I wasn't a terminally slap-dash saw setter, and looked at a certain way, it turns out I don't actually have enough Eclipse 77s. Who knew?
Posted by Alf at 10:34 am 1 comment:

Yes, I thought many of the readership was too well-versed not to recognise the dog's wotsits when they saw them - the rush to identify them was swift and sure. Joiner's or Pinch Dogs it is. 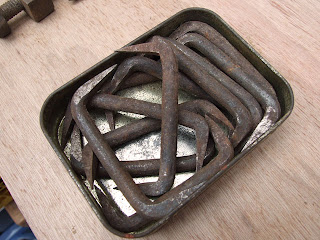 These came in the Patternmaker's Mother Lode, which makes a lot of sense, as clamping up awkward shapes such as wooden patterns is something they're apparently rather good at. And just as soon as I need to do that, I'll be ready and waiting. As Brian pointed out in the comments, Lee Valley still sells them, and their blurb explains their use as well as anything if you're not familiar with this particular breed of canine.
Anyway, it's a blessing to the tool accumulator when something is classed as a clamp. Why? Because we all know you can never have enough of those... ;)
Posted by Alf at 10:37 am 1 comment:

As we haven't had a Woodworker's Wotsit for a while, I offer up this tobacco tin of potential - and currently rusty - puzzlement.

Not that I think it'll puzzle some people for any time at all, so don't be surprised if your comment doesn't appear straight away - it'll probably mean you're correct... Bonus points if you've ever had cause to use some. I haven't - yet.
Posted by Alf at 10:06 am 12 comments: