All vices, of course, although I only indulge in the last. Arguably old tool acquisition is another, albeit lesser known one, which, yes, I have been guilty of. It's a fair cop, I'll come quietly, officer. What about the acquisition of old vices though? Doubly vice-like, presumably? I have no idea, but I've been pretty good at resisting them. I really have. I'm in the land of Record, for heaven's sakes, and yet this is probably the only workshop in the Western world that doesn't contain a Record vice.
I know what you're thinking; it was always too good to last. In my defence there's very little one can do if you have no choice in the matter and one just happens to arrive on your doorstep like an orphaned babe, all the way from Bonnie Scotland. And even now it's not one of Sheffield's finest. In fact I suppose really it ought to be referred to as a 'vise'. 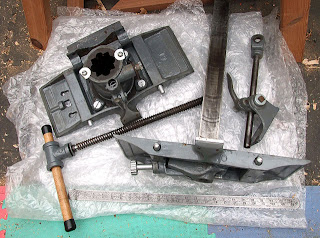 Now at this point, some of you might be wondering where I got that skinny 12" rule from and isn't that a funny-looking vice? Some of you won't. Some of you may be thinking "Alf, is that what I think it is, you jammy @*$^#...?"
So, just to clear things up: it's a two-foot (patternmaker's) rule, and yeah, it's 86lbs of Emmert patternmaker's vice. A big one. It's actually a Type T5, minus its turtleback cover. Eeek! 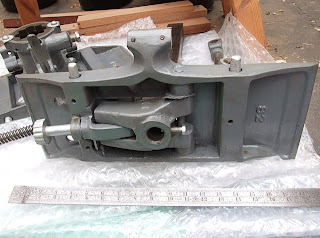 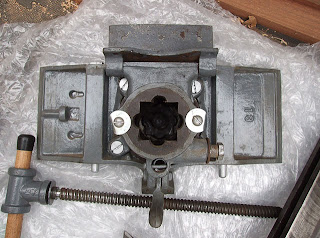 I won't explain how it comes to be chez Alf - mainly because I'm still not absolutely sure myself. It's a complicated story and I seem to have been nominated unwitting-beneficiary in a complicated vice triangle. Which sounds like a story in the News of The World... Anyway, it's absolutely not a tabloid story, and is instead all very nice indeed, whilst also being very, very scary.
Anyway, what does Alf do when presented with old arn she knows not of and an urge to put off doing anything practical about it? Hits the books, Old Tools List, Google, and on the off-chance, UK Workshop, of course. First, second and third all came up trumps, as expected. In addition to the Iron Hand site linked to above, also Walt Q at Brass City Records looks potentially helpful and a fair few threads from the galoots, notably this one. The Workbench Book has quite a chunk on them too. But most surprisingly of all, and why I do love the small world that is online woodworking, I didn't find just information on Emmerts generally at UK Workshop, but I believe I've found this very vice in particular. Location and who knows who certainly fits its history, never mind the appearance, so that was a bonus.
All very helpful, not least in terms of prevarication. Because naturally this throws up all sorts of troubling things I don't want to address. Such as "Can I bring myself to cut a big bite in my beloved workbench?", "Should I fix it flush or not?", "How d'you flatten a workbench top if it has a ruddy great big cast iron plate let in the top of it?", "Where in Hades am I going to find screws big enough to fix it?", "Can I get it back together again?, "How does it work, anyway?" and most of all "Help!" and a terrible urge to run away. Yep, it's going to be a saga, I just know it is.
And yeah, that's my other vice; finding the cloud round every silver lining...
Posted by Alf at 1:07 pm 4 comments: