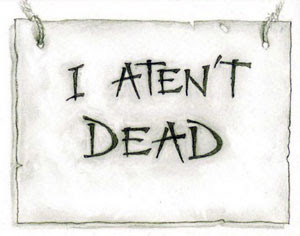 Honest. Promise. About three months ago (Three months?! Eeep!) I took some pics for blog entries, and thought "I'll hang on to those a bit, until I've made a bit more progress". And yes, you've guessed it; no further progress. Anywhere, on anything. It was only when the "Alf, where are you?" emails started to pile up in the inbox, that it occurred to me I should probably pop my head over the parapet and give anyone still watching, a wave. So here I am. Waving.
Hopefully the few hours I've just spent going through my inbox has picked up all the emails I should have replied to, but if you're one of the neglected (and it's not about me valuing your combination plane) then shoot me another and I will trying to shatter my current seven day personal best.
One of the most neglected was that of Tony Konovaloff, who's name you may recall has popped up on this blog before, and who was doing the hand tool thing way, way before it was fashionable again. Some time ago he let me know about his website, and then subsequently about his book finally making it into print, both of which I failed singularly to pass on to the reader. The latter, by now, you've probably found put about via The Schwarz (thanks to Ethan for drawing my attention to that), but for us overseas folks, shoot him an email and I gather he'll look into pricing on shipping it overseas.
Anyway, as to more regular updates to this blog, I can't promise anything. The spirit is reasonably willing, but the flesh is basically buggered at the moment. Heigh ho. Nothing terminal or even moderately exciting, just an old familiar foe who fancied to reminisce. Lucky me...
So, um... That's about it really. I dunno, perhaps it's just me, but that "I aten't dead" sign I've shamelessly swiped from Google images - do those letters look kind of like cut nails to you? In which case someone had a serious hammer malfunction when they tried to drive those ones that make up the Ds. On which musing, I go.
Posted by Alf at 2:55 pm 10 comments: